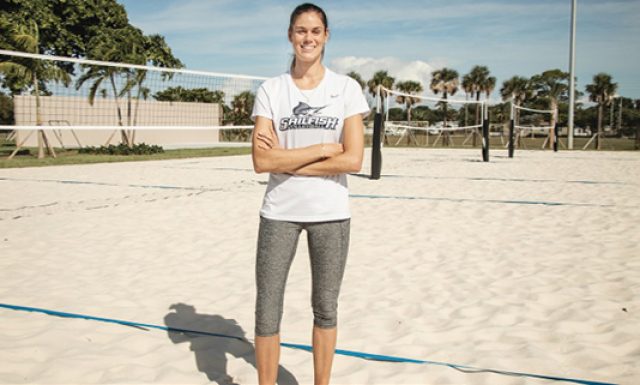 WEST PALM BEACH, Fla.—Palm Beach Atlantic University has announced the addition of beach volleyball as the 18th intercollegiate sport beginning in 2019-20 as well as the hiring of Christina Alessi Matthews as the program’s inaugural head coach.

Matthews was a four-year standout for the Sailfish on the indoor volleyball team, finishing her career as an AVCA All-American in 2013. The West Palm Beach native registered over 900 kills and 300 blocks in her four seasons as the ‘Fish qualified for the NCAA Regional Tournament in 2012 and 2013.

“Initiating a beach volleyball program has been a dream of the athletic department for several years,” Vice President of Intercollegiate Athletics Carolyn Stone said. “We are so pleased to launch our 18th sport with a stellar facility at the award-winning Marshall and Vera Lea Rinker Athletic Campus and a highly accomplished PBA alum, Christina Matthews, as our head coach. This addition is in clear alignment with the University’s strategic plan and will attract even more students who can develop into Christian game changers.”

After her playing days at PBA, Matthews turned her attention to professional volleyball playing both indoor and beach. She played for the Florida Wave in the Premier Volleyball League in 2014 as the team captured the league championship. She also played professionally in Sweden and the Philippines before transitioning to beach volleyball.

“As the new head coach I am very excited to have the opportunity to be able to come back and coach at my alma mater,” Matthews said. “I can confidently say that my time at PBA helped prepare me to be a game changer on and off the volleyball court and I am excited to see how God is going to continue to use this awesome sport to make a name for Him through this new program. Go Sailfish!”

Matthews has competed in the National Volleyball League and the AVP Pro Beach Volleyball Tour. She won an EVP event and qualified for a FIVB event as well. She’s also won several AVPNext tournaments as well as competing and winning local open beach events.

In the NCAA, beach volleyball is classified as a National Collegiate sport, meaning that there is no division structure for one of the newest championship sports in the NCAA. The first national championship sponsored by the NCAA was in 2016. In the 2018 season there were 69 schools that competed in beach volleyball at the varsity level including 11 primarily Division II schools. There were also 11 schools in the state of Florida that sponsor the sport between Divisions I and II.

Matthews graduated from PBA in 2014 with a degree in elementary education and a minor in studio art. She also attended The King’s Academy, graduating in 2010. She was inducted to the school’s hall of fame in 2016.

The Sailfish will compete during the Spring of 2019 as a club program with the varsity program beginning play in 2020. The beach volleyball season begins in February and culminates with the national championship in May.

PBA will use the newly completed sand volleyball courts at the Marshall and Vera Lea Rinker Athletic Campus as the program’s home. The three courts located near the campus entrance were built to NCAA specs and feature Musco lighting and shade structures.