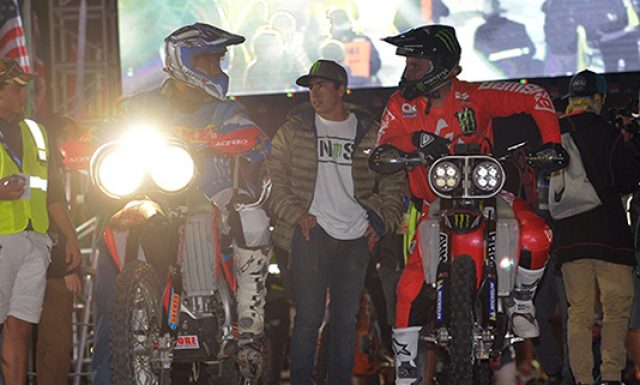 There are so many stories one could tell about the Baja 1000 in any given year that it could fill a sizable book. For the 50th Annual BF Goodrich Tires SCORE Baja 1000—the fourth and final round of SCORE’s World Desert Championship, running this year from Ensenada, Baja California, Mexico, over an 1,134-mile course to the finish in La Paz, Baja California Sur—it might take a full set of encyclopedias!

Being the golden anniversary of the granddaddy of desert races, it became the target for each of the 412 entries, 108 of which were motorcycles and ATVs. And there’s absolutely no doubt that each of those entries had a number of additional personnel, each of whom now has a collection of tales from pre-running, chasing the race itself, or even describing post-race activities.

Even within the two motorcycle teams that fought it out most of the day and night, there are many storylines. Going into this desert classic, the long-suffering Bremen-Arredondo-Haines Racing CRF450X wearing the 45X number plate had the upper hand in points, having won rounds two and three. To finally take that next step and claim the 1X series championship plate for next year, essentially “all” the Francisco Arredondo, Ty Davis, Max Eddy Jr., Shane Esposito, and Justin Morgan team had to do was finish just behind the defending series champs: Bonanza Plumbing/Monster Energy/Ox Motorsports Honda-mounted Justin Jones, Ryan Penhall, Mark Samuels, Colton Udall, and Ian Young.

“It takes pressure off, but it’s not changing going for a win,” Esposito declared a few hours before the midnight start on Ensenada’s main street. “We are playing it safe to an extent, but there’s no [plan] to let them by and follow them—it’s stay out front and go for the win.”

Arredondo’s team had chased the championship for several years now and endured multiple disappointing moments that hampered their consistency. “This has been a big commitment; to do it these last two years has been really serious for us as a team, going for it, so it’ll be a big relief [to finally win it],” Esposito shared.

The defending series and race champs enjoyed unmatched consistency last year, winning all four rounds, but that eluded them this year, even though they began by winning the San Felipe 250. Second in points, going into the 1000, nothing less than victory would allow the Samuels-led team to keep the 1X plate.

“Obviously, it was really tough at the beginning with Colton getting hurt [while pre-running for last year’s 1000 and then again a few weeks later at Glen Helen] and kind of putting us back [in team readiness],” Samuels said. “We won San Felipe—barely—then at the 500 we had a good ride, but I had a big crash and took us out of the win. [Tijuana] was a tight race, but they ended up winning that one too.

“Colton’s been working hard to get back to be able to race. With him, myself, and Justin Jones, we’ve won the [1000 the] last two years together, so I’m pretty happy to have both of them back to go race with me. We’ll do the majority of the race and have Ryan Penhall and Ian Young finish off the last 300 miles for us.”

In the race, Arredondo’s team had drawn the first starting position so they’d be the hare for the entire race. Since the Samuels squad started second, two minutes after, the race would take shape quickly.

Issues early on didn’t bode well for the Bonanza/Monster/Ox group, though, and they fell back by as much as 30 minutes. However, they knew that anything can happen in a race as long and rough as Baja; as Penhall noted, “We all kept saying, ‘Keep charging!’ ”

While the CRF450X gearbox (and the entire bike in general, really) has earned a reputation for durability in countless miles of riding and racing in Baja, the unexpected happened to the one in Arredondo’s bike and it began to fail, with fifth gear often unusable. Losing the ability to hit triple-digit speeds in a race with so many places to exercise that option can, of course, kill a team’s hopes of victory, and Arredondo’s men switched from attack mode to survival mode, praying they’d built up enough of a lead to stay there in the remaining couple hundred miles as the sun set. Oh, and an issue with lights after hitting a cow in the dark also hampered those last miles.

On the other hand, the Samuels crew smelled blood and their machine was in top form as they ate away the deficit. When Morgan pulled 45X in for a scheduled but longer-than-expected pit in the final 100 miles, Young sped past, 1X gaining the lead for the first time in this 1000.

Elated at the prospect of winning the 50th anniversary 1000—which would also mark his first triumph in this classic—the 23-year-old Young couldn’t help but celebrate after crossing the finish line and riding up to the finish stage, which was slick with dew. He went in hot, tried to get a little air, and lost control upon landing.

Although he quickly sprang up to show he was okay and continue celebrating, unfortunately his errant machine struck a couple of bystanders, sending at least one to the hospital with a broken leg and other injuries.

Morgan came in a few minutes later, the Arredondo team somewhat subdued after apparently losing the biggest race of the year.

“We knew it was going to be a fight for us,” Arredondo admitted. “It is really special, the 50th anniversary, and we really gave it all to try and win. We tried to stick to our plan the whole time and were surprised in some places where we made up time.

“We had some problems with the transmission at the end which made us worried. We didn’t know if the bike was going to hold up from Loreto to the finish and Justin had to adjust his riding at the end.”

However, SCORE officials soon slapped a 30-minute penalty on the Samuels team for “unsportsmanlike conduct” and that handed the win to Arredondo, not that it made a difference in year-end standings. Whether first or second, Arredondo could trade 45X for 1X, but it’s always nicer to end the season by winning.

Officially, Arredondo’s group won in 21 hours, seven minutes, and 17 seconds (making them third-fastest vehicle overall behind two Trophy trucks) while the penalty set the Samuels team back to second in 21:26:47. (Fun fact: The victory was the fifth for Ty Davis, his last one being back in 1996—the Team Green era—with Paul Krause and Greg Zitterkopf on a KX500. That might be a record for time between overall wins in any race!)

Years of chasing championships in other classes gave Guatemala’s Francisco Arredondo (left) the experience needed, and assembling a team that’s concentrated on the Pro Moto Unlimited title the last two years produced a winning effort at last. Here, he chats with championship rival and defending series and race champion Mark Samuels before being the first to get the green flag. Samuels would start next, two minutes later, and their two teams ended up riding away from the field in a private, dramatic battle. Mark Kariya