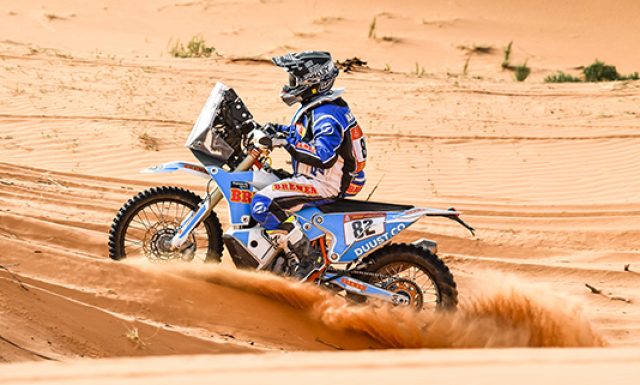 Guatemalan Francisco Arredondo lived a strong battle on Friday in the sixth stage, of 830 kilometers, and proved to be a specialist warrior and made his best performance in the Dakar 2020 Rally, which is held in Saudi Arabia.

Arredondo finished in position 76 of the classification of the stage, with a time of 6h47: 46, reaching 2h11: 18 of the winner of the day, the American Ricky Brabec, who is also the absolute leader of the competition.

With this epic performance, Arredondo climbs considerably in the general classification, now ranking 86th, advancing 7 places by reaching the halfway point of the most difficult test in the world.

Satisfied by the great performance this Friday, supported by the Duust Rally Team, Arredondo arrives at the rest day that will be this Saturday in the city of Riyadh with the satisfaction of having done a good job in the first part of the Dakar.

This Saturday the riders will remain in the bivouac in Riyadh where they will take a well-deserved rest after 6 demanding stages. Here the mechanics will have the opportunity to repair and tune the machines, in the case of Arredondo they will work on the KTM 450 Rally Replica 2019 motorcycle.

Beyond all that, it will be a moment of meditation and analysis to face the final 6 days, in which the 9 stage of next Tuesday stands out, which will be the longest of the route of the Dakar Rally 2020, since it will consist of 886 kilometers, which 410 will be special timed.

With information from César Pérez M.