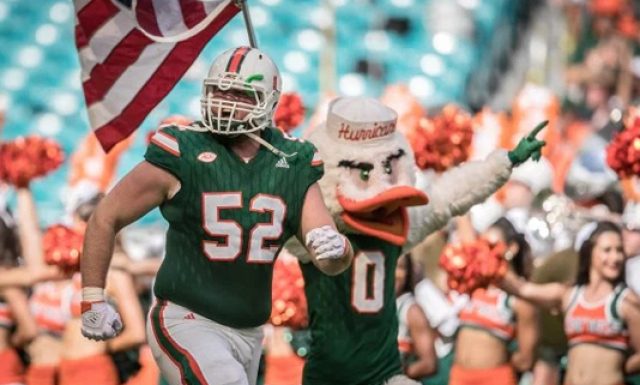 Written by Jason Lieser for The Palm Beach Post.

The competition Kc McDermott faces as he prepares for next month’s NFL Draft and the ensuing fight for a roster spot is comfortable terrain for him. He grew up speaking that language before making his way to the University of Miami and becoming the team’s best offensive lineman as a senior.

He comes from a home in Lake Worth that produced two collegiate o-linemen ahead of him in brothers Shane and Tyler, and with all three boys growing toward that 6-foot-something, 300-pound range, their scuffles were rough.

“There was a lot of fighting, but it was more competitive, whether it was going in the front yard and playing one-on-one basketball, going out to a hockey arena and playing hockey, going up to the baseball field to see who can hit the furthest homerun or who can pitch the fastest, then obviously on the football field.”

Tyler went to Colorado State and currently works as an assistant at Notre Dame. Shane played at Miami and made the Dallas Cowboys’ practice squad as an undrafted rookie in 2015. That set a lofty standard for Kc, who was a top recruit at Palm Beach Central High School.

But the drive to catch up to his older brothers began long before he saw them earn college scholarships and NFL opportunities. When McDermott was little, he practiced with his own age group in the early evening, then walked over to his brothers’ field, where his father was the coach, and joined in those practices as well.

It was the perfect preparation for what he’d encounter at UM and beyond, and McDermott believes his solid career for the Hurricanes and versatility will entice NFL teams. He’s projected to be a late-round pick or an undrafted free agent.

He’s 6-foot-7, 300 pounds and played tackle and guard on both sides during his college career before settling in as the starting left tackle last season. He is confident about playing any position in the pros.

“I’ve played across the line my entire life,” McDermott said. “I’ve played center in every single practice that we’ve ever had. I’ll do anything the teams ask me to do.”

He had a good week in Indianapolis, placing in the top 14 among offensive linemen in the bench press (26 reps) and three-cone drill (7.72 seconds). He also met with more than 20 teams and will get another chance to impress them at UM’s pro day next week.

The Dolphins were among the organizations that spoke with him about how he’d fit in the NFL, and McDermott acknowledged that would be a special opportunity.

“They know me pretty well because of the fact that I went to the University of Miami, so I’m right down the street,” he said. “For them, it was just another get-to-know-you meeting, nothing special about it really.

“Being in Miami would be something special. I was born and raised in South Florida, so to be able to stay there and play for the team that I cheered for growing up would be nice, but all 32 teams are out there and they’re all looking for linemen and I’m going to be one of them.”