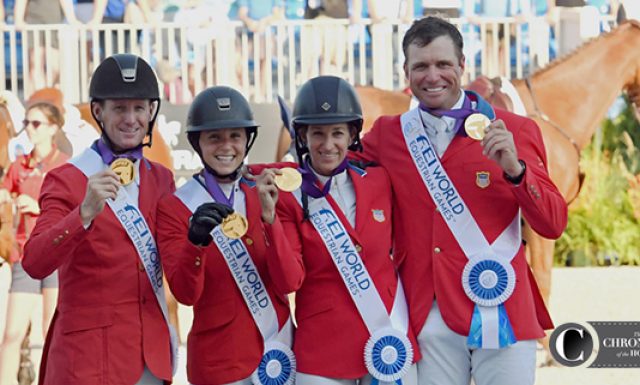 Written by Kimberly Loushin for The Chronicle of the Horse.

As the seconds ticked down, McLain Ward pressed Clinta forward just a bit more. No matter what he did, it’d be a gamble. If he dropped a rail, the NetJets U.S. Show Jumping Team would be relegated to the silver position. But if he went for the careful clear and didn’t beat the Swedish team’s time, it’d be the same result.

The tension radiated through the stadium as the 11-year-old mare sat back on her haunches and launched herself over the final oxer of the Bank of America Merrill Lynch Show Jumping Team Championship at the FEI World Equestrian Games. Time seemed to stand still as her hind legs dropped deftly clear of the back rail, and she galloped through the timers.

Instantly, the silence was broken as the stadium erupted into a thunderous roar. After keeping an unreadable expression on his face throughout the week, Ward’s demeanor changed and opened into pure glee as he yelled out his own excitement and fist pumped in victory while Clinta made a lap around the U.S. Trust Arena.

“I think Adrienne said it best; she said, ‘Let’s not wake up from this dream,’ ” said Chef d’Equipe Robert Ridland. “This is what we do this for.”

A unique series of circumstances led to the jump-off for gold. In the opening speed round, riders are assigned fractional points based on how much slower they were than the winner, so it was extremely unlikely that two teams would end up with the exact same score.

But that’s exactly the position the Swedish and U.S. teams found themselves in.

A Major Battle
After the first two rounds of competition the U.S. riders were in the silver medal position on 12.59 faults, and Sweden’s team was in fourth on 20.59. The overnight leaders from Switzerland fell out of contention when their first rider Werner Muff (Daimler) picked up 13 faults and Janika Sprunger was eliminated after Bacardi VDL refused the second fence twice.

The U.S team hadn’t been so lucky. Devin Ryan and Eddie Blue had a late rail on course, and Adrienne Sternlicht lowered the same fence with Cristalline and also picked up a time fault.

“Things happen so fast out there,” Ryan said. “I felt like I got there right; I felt like I stayed over him in the air. Maybe I just didn’t press him enough. I got the same question from the Chef d’Equipe Robert [Ridland], when I came out. He was like, ‘What do you think happened there?’ You know, when you’re out there, it’s every jump down, so you have to finish every jump. I don’t know if I didn’t just finish that jump enough. He jumped again super today. He was jumping really careful. He’s been in good form all week; it’s just not been my week.”

“It was off the right lead, which is her weakness if she had any; she has no weakness really,” Sternlicht said of her round. “I tried to stay out for the turn a little bit, and I just lost her. I lost my impulsion, and then I tried to kick across. She did nothing wrong. It was all me, and I’m kicking myself.”

After a disappointing 8 faults yesterday, Laura Kraut had a redeeming round with Zeremonie to add nothing to the team’s score.

“She was incredible today,” said Kraut. “Believe it or not, I think, maybe yesterday I left her a bit too fresh. So today, you wouldn’t think it on the fourth day of extreme heat and jumping that she would still have bucks in her, but she did this morning. And I think I gave her a bit more exercise today, and she was just spot on.”

If he could jump clear, the team would have clinched the gold outright, but when Clinta dropped a rail midway around Alan Wade’s track, their fate to jump-off was sealed.

A Nail-Biting Finish
It was a situation that’s never happened at a WEG, and it was a nail-biter right until the end. Both Ryan and von Eckermann jumped clear, while second in the order Baryard-Johnsson and Sternlicht each pulled a rail. Then Jönsson and Kraut followed with their own speedy clear rounds.

So when Fredricson jumped clear—though with a fairly conservative time of 34.43 seconds—the pressure was back on Ward. This time Clinta was faultless and with a time of 32.58 seconds, he gave the U.S. team a 2-second margin of error for the gold. Germany took bronze.

“To be here in our own country and win against such great competitors, hard fought to the last riders, I don’t think we’ll ever see anything like this again,” said Kraut. “Thanks to supporters and owners for this opportunity. At my age it’s great.”

Ward is fifth in the individual competition, and Germany’s Simone Blum is currently in the lead. When asked if jumping an extra round might be a disadvantage going into Sunday’s individual final, Ward said no.

“Funnily enough with Clinta it will help her,” said Ward. “She’s so extremely careful and had the rail down today because she went too high. So to go back in the ring and gallop along and gain her confidence…. She’s fit. She can handle the weather. I’ve got some climbing to do, and Simone doesn’t look like she’s making any mistakes. It will be a good battle on Sunday.” 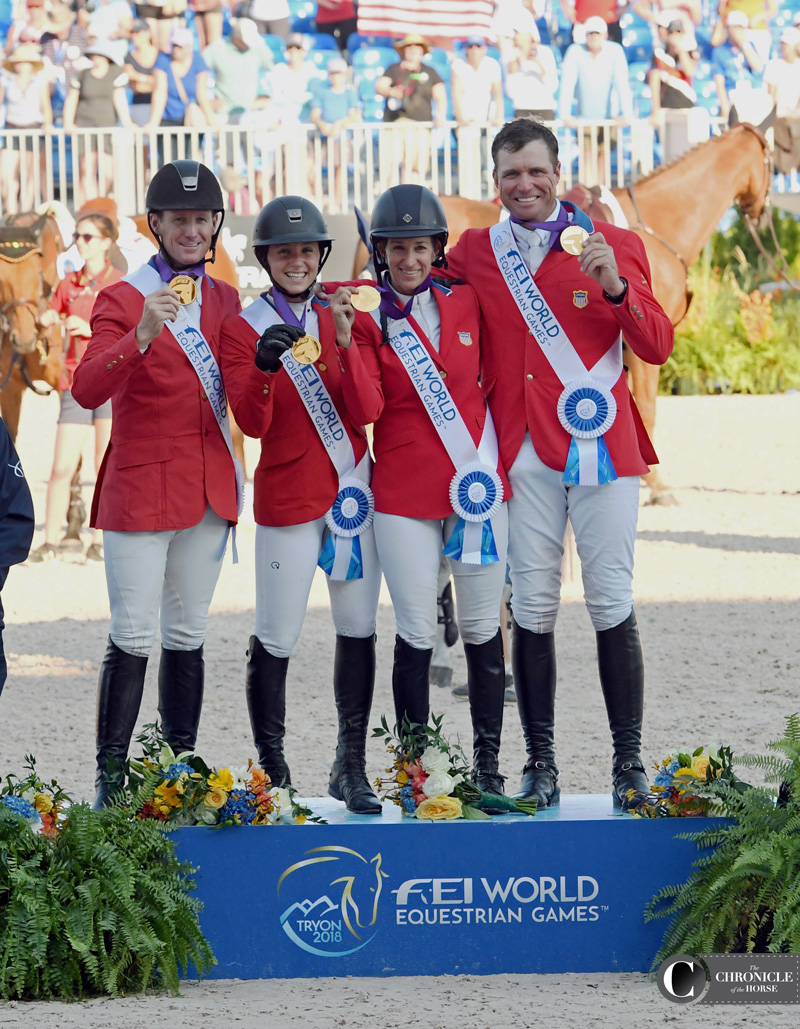