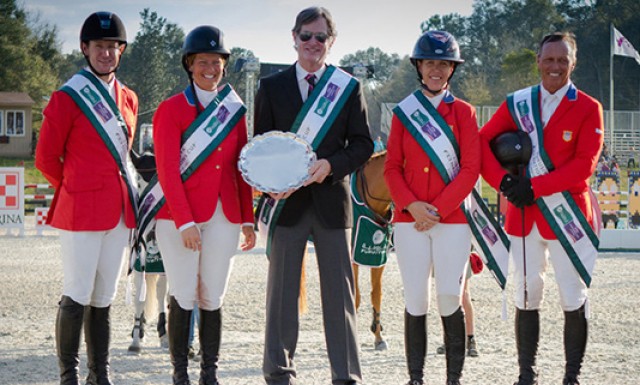 Press release from FEI for worldofshowjumping.com

OCALA — Team USA won today’s second leg of the Furusiyya FEI Nations Cup 2016 series on home ground at Ocala, Florida (USA), but had to rely on anchor rider, Beezie Madden, to clinch it with a last-to-go effort with Breitling LS. On a day of very mixed fortunes, and with many inexperienced horses and riders facing the biggest challenge of their careers so far, this opening round of the three-leg North and Central American and Caribbean League produced a fascinating contest.

The top-drawer American side of McLain Ward, Lauren Hough, Todd Minikus and Madden always looked strong favourites, but had to see off a determined effort from Team Mexico who lined up second, while Colombia put up a tremendous battle to clinch third spot ahead of Australia in fourth place.

The Irish, winners at last year’s edition at the same venue, had to settle for fifth this time around, while it was a disappointing day for Team Canada who slotted into sixth. A big first-round score put the writing on the wall for the Canadian foursome who only managed to leave New Zealand and El Salvador in their wake.

Winning Chef d’Equipe, America’s Robert Ridland, admitted afterwards that today’s success was no walk in the park. “We knew coming in that the competition was going to be tough, especially when you see the line-up. Since the Pan-American Games the level has gone up a notch and we needed to bring the best team to Ocala in order to have a chance to win. It was a bit stressful!” he said.

The hunt for points

Of the eight participating nations, there were four – Canada, El Salvador, Mexico and USA – in the hunt for the two places on offer at the Furusiyya FEI Nations Cup Final 2016 in Barcelona in September. The team from El Salvador was vulnerable from the outset with only three horse-and-rider combinations, but they got off to a great start with one of just six clears in the opening round from Paulo Santana and his lovely 16-year-old gelding, Taloubet.

However the Americans were in complete control when they produced three clears to lead at the halfway stage on a zero score, Lauren Hough’s four faults for a mistake in the middle of the Longines triple combination providing the discard.

Irish course designer, Alan Wade, presented a typically bold track, and just about every fence hit the floor at some stage during the competition. The wall at fence three was followed by a 1.50m-high oxer of green poles over a water tray which backed up a few, but the first big test was the open water at fence five which penalised six horse-and-rider combinations in the first round and continued to wield its influence second time out. Some found it difficult to re-group for the following vertical, but it was the triple combination off the following left-hand turn that produced much of the early drama, the vertical-oxer-vertical built on a one-stride distance, and demanding absolute accuracy.

As the second round began Team USA had two fences in hand over Colombia in second place while Mexico was close behind in third with just nine faults on the board. The Australians lay fourth carrying 11, but the Irish were already out of the picture with 21 while New Zealand carried 22 and the Canadians were trailing the field with a surprising 24.

The team from El Salvador decided to retire because, despite Santana’s lovely first effort, they were already on a 35-fault scoreline.

The US lead began to diminish however when McLain Ward’s feisty 15-year-old gelding Rothchild hit the second element of the double towards the end of the course and then Hough left the last two elements of the Longines triple combination on the floor. When Todd Minikus and Babalou piled on another 12 faults it was beginning to look a bit ominous, but Madden still had nine faults to play around with going into the arena for the last time.

The Colombians meanwhile had added 16 to their total despite a clear from Daniel Bluman and Conconcreto Sancha LS this time out, so Mexico had already moved ahead of them despite an alarming 19 faults for their opener, Alberto Michan.

Hanging in the balance

Wordley retired, but Michan knew how much was hanging in the balance so continued on, collecting additional fence and time faults before getting through the finish. His team-mates kept their nerve however, Eugenio Garza Perez (Bariano) and Federico Fernandez (Guru) both faulting just once at the second element of the double on the last line, and Santiago Labre adding four more at the middle element of the triple combination. Their final tally of 21 meant that Madden would need to pick up nine faults to draw level, and that three fences down would give Mexico the victory.

That never looked likely to happen, the 52-year-old double Olympic team gold medallist making it all look fairly elementary as she brought her 10-year-old stallion home with just a single time fault to clinch it.

“I was in a nice position because I could afford to have two rails down and win. As an anchor rider that’s the best position to be in!” she said afterwards. “My horse jumped great in the first round so I was confident he could do the same again. I wasn’t worried that things were falling apart for different people. The sun coming down and the shadows undoubtedly affected my vision a bit which is why I took a bit more time” she explained.

She sees a great future for Breitling LS. “We got him when he was seven. He is now starting to become quite dependable and I couldn’t be more excited about him!” she added.

American Chef d’Equipe, Robert Ridland, was both delighted and relieved. “We competed a bit differently than previous years whereby we have tended to start badly and finish well. This year was the contrary, so I was a bit worried to begin with! The liverpool affected the horses. One of the really unique aspects of the Nations Cup is the courses and it was a real mix today. We were fortunate to come away with the win. It’s clear after today that the next two qualifiers will be really tough. We are going to be in Mexico on their home patch next time, and we saw today how difficult it is going to be, given their result in particular” he pointed out.

“Our biggest goals this year are the Olympic Games and the Furusiyya FEI Nations Cup Final in Barcelona,” he continued. “The team events are what we are all about and it’s such a unique situation. A course like that today, and the way Lauren fought for the score in the second round, you don’t get that in a Grand Prix” he said.

Course designer Alan Wade concluded, “everyone thought the class was over at the break, and yet it all came down to the last horse – that was a great enjoyment for me.”