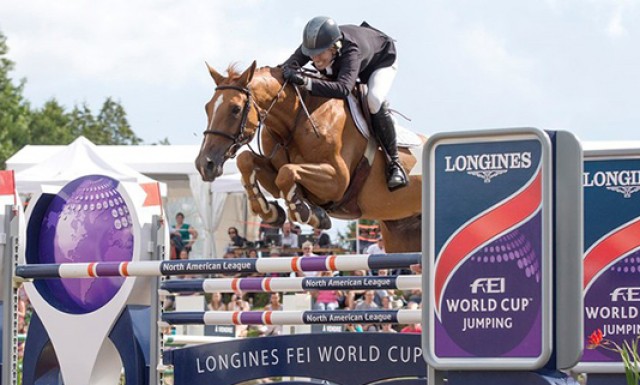 QUEBEC — Sunday marked the kick-off of the new Longines FEI World Cup Jumping – North American League, and with a limited number of events to earn points, riders were aiming for the top of the leader board. Eight horse and rider combinations advanced to the tiebreaker, but it was the final pair that took home the victory, as Schuyler Riley piloted Dobra de Porceyo to a speedy double clear in the CSI3* $100,000 event at International Bromont.

“I am quite thrilled with the results from today,” smiled Riley after her lap of honor. “I think Longines is a wonderful sponsor, and they’ve chosen a wonderful place to start the League. Today felt very special; there was a great crowd here, and a great atmosphere.”

Peter Leone was the first to return for the jump-off with Wayfarer, but a refusal at the combination resulted in a total of 15 faults. Canada’s Mac Cone was up next, but lowered the height of an oxer with Gasper van den Doorn for four faults and an eventual sixth place. Melissandre Lincourt of Montreal was the highest placed Canadian with Just Stella L, but also had a rail at the combination for four faults and fifth place.

“We were just jumping this class to see if my mare could jump a real 1.60m class,” said Lincourt. “There was no expectation from the beginning, this is just extra icing on the cake. I think the mare proved she can jump, and maybe tomorrow we will realize what we just did.”

Ljubov Kochetova with Urus 2, who broke the beam at 46.08 seconds, produced the first clear round. “I showed here all three weeks and this horse jumped very well the first week,” she explained. “He had one week of rest and felt very good.”

Yesterday’s winner of the Modified Grand Prix, Charlie Jacobs, had his own plan, and was able to top Kochetova’s round, galloping through the timers in 44.43 seconds with Flaming Start and leaving all the rails intact.

“I wasn’t just going to go for a slow clear, I wanted to put a little pressure on without going breakneck,” said Jacobs. “I thought we accomplished that and we were a few seconds faster than Ljubov. My approach was to go tidy, fast, but not crazy.”

Jacobs left the door open a hair, but when Daniel Bluman tried to catch him with Conconcreto Believe, and Quentin Judge tried with Copin van de Broy they each had rails, eventually placing seventh and fourth respectively.

The final rider to show was Riley with Dobra de Porceyo, and coming off of two grand prix wins in Tryon, Riley felt confident in her mare. The pair left strides out in three of the lines and never touched a rail, blazing across the finish line in 41.31 seconds to take home the winning prize.

“My horse is naturally quite fast,” said Riley. “In the jump-off there were a lot of long gallops and some roll back turns, so I kind of used her big stride to gain the advantage. She’s very careful and she’s quite fast across the ground.”

Course designer Anthony D’Ambrosio commented, “We had a high standard today, and we had some very good jumping. We had some young horses do their first 1.60m class today and have a good experience. My plan was to keep it real, but keep it encouraging and I think we had that result. “

Dobra de Porceyo is only nine years old, and Riley has worked hard to build a special bond with the chestnut mare. “I got her because not a lot of people were staying on her,” laughed Riley. “We basically have worked out our level of communication, where she gets what I want and I get what she wants. I think we have an amazing relationship and I feel like she really loves the sport. I’ve been blessed to have her come across my path.”

With Dobra de Porceyo continuing to showcase her talent, Riley is excited to have gain valuable points towards qualifying for the World Cup Finals in Gothenburg, Sweden. “It’s a brand new format, and I have not had a horse in a long time that I felt was ready to go to the World Cup,” she commented. “[In the new League] you can plan and strategize to peak at the right moment with your horse. On the day when it’s required for you to perform, you have to perform, just like you would at the Finals.”

The Jacobs family will be hosting one of North American League East Qualifiers at Deeridge Farm in Wellington, Florida on February 7, 2016, and Charlie is very excited about the new format. “I think it’s great,” he stated. “It’s made the League that much more elite and special that there are only 14 of these events in North America. Thank you to Longines for making these events really, truly special.”

International Bromont organizer Roger Deslauriers concluded, “Thanks to Longines for being on board with us. For us it’s very important, especially looking towards WEG in 2018. With the improvements to the facility, I think in the very near future, we will be able to offer the best sport for the rider.”