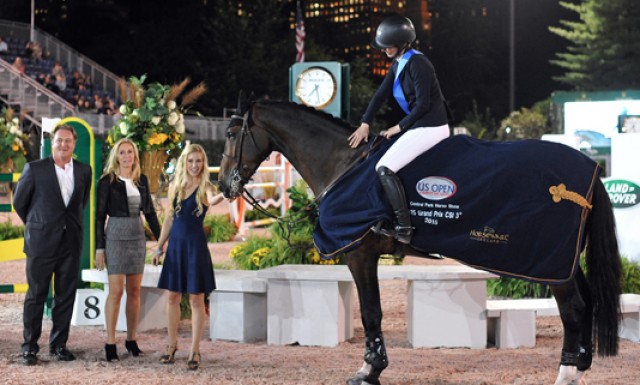 NEW YORK – U.S. Open Show Jumping commenced at the second-annual Rolex Central Park Horse Show in Manhattan’s Wollman Rink on Thursday evening with a $40,000 FEI Speed Class, presented by Canadian Pacific Railway, and the $25,000 Under 25 Grand Prix. Nicole Bellissimo took top honors in the $25,000 Under 25 Grand Prix in the irons of Harley David to kick off day two of the Rolex Central Park Horse Show, which continues through Sunday, September 27.

21-year-old Nicole Bellissimo and Harley David made her father, Mark and The Bellissimo Family proud with a win in the U.S. Open $25,000 Under 25 Grand Prix. She piloted her eight-year-old Dutch Warmblood gelding (HarleyVDL x Libby) to the only double-clear effort of the class, finishing in 38.07 seconds after a four-horse jump-off.

Abigail McArdle and Harriri V.D. Maltahoeve posted the first clear round from the first position in the original order for owners Plain Bay Sales. She was later joined by Kelli Cruciotti aboard Serenity Equestrian Ventures’ Chamonix H, Hayley Barnhill with The ISB Group, LLC’s Beezie, and finally Bellissimo.

Returning first in the jump-off, McArdle had two rails to finish fourth. Next, Cruciotti and Barnhill both pulled one rail apiece before Bellissimo returned with an open door. “I was obviously in the advantageous position of going last,” said Bellissimo. “At the same time, I wanted to make sure that if I had a rail I wasn’t too slow and I tried to ride that plan.”
Nicole Bellissimo and Harley David in their winning presentation with her family: Mark, Katherine and Paige Bellissimo Photo by Josh Walker for The Chronicle of the Horse

Bellissimo broke the beam clear in 38.07 seconds for the win, while 18-year-old Cruciotti claimed second on four faults in 37.31 seconds, and 22-year-old Barnhill third with four faults in 37.34 seconds. “I’m so thrilled to be here, and I want to thank The Chronicle of the Horse and Rolex for putting on this fantastic event. To think that we’re competing in the middle of New York City with that skyline behind us is an incredible experience,” added Bellissimo. “I’m so happy with my horse. He’s only eight, so he really had to step up this year and he absolutely did tonight.”
The Under 25 Grand Prix Series is designed to give young riders a valuable stepping-stone from the junior and amateur ranks to the grand prix level and was spearheaded by Equestrian Sport Productions (ESP) and Artisan Farms at the Winter Equestrian Festival in 2010.

“I’m very proud of all three riders, but especially proud of the winner,” said Mark Bellissimo, CEO of both ESP and IEG. “As a father thinking of the strategy, you know there were no clear rounds so I thought she would go slow, but she took some turns that I wouldn’t have taken. That’s why I’m sitting in the stands and she’s not.” Bellissimo continued, “It was a the perfect kick-off to a great event and I’m excited to see the Under 25 division emerge.”