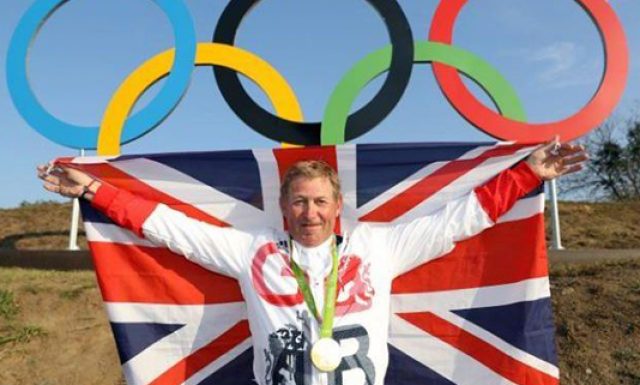 Radhika Sanghani’s interview with Nick Skelton for The Telegraph

I never expected to win gold at Rio 2016, but I knew in the back of my mind that Big Star – my 13-year-old showjumping horse – was capable of leading us to victory. If I didn’t mess it up, he wouldn’t either.

The results speak for themselves. Everything went smoothly and now at the age of 58, I am officially the oldest British Olympic gold medallist since 1908.

I sat on my first horse when I was just 18 months old. My mum rode for pleasure, and my father was in the veterinary corps so they were always around horses and encouraged me to ride from an early age. They even bought me a pony called Oxo, who stayed alive long enough for my sons, Dan – now a National Hunt trainer – and Harry – a National Hunt jockey – to ride him.

As a child, I had pony tuition but it was only when I started working with the trainer Ted Edgar when I was 14 that I started competing extensively. Since then I’ve competed all over the world and Rio was my seventh Olympics.

Winning the gold this year was amazing, particularly because my body has had a lot of abuse over the years. Riding takes its toll and I’ve been particularly unlucky. You don’t normally get a lot of injuries as a showjumper, but I had a hip replacement six years ago from general wear and tear, two knee operations and a shoulder operation in recent years. In 2000, just before the Sydney Olympics, I broke my neck.

It happened when I was riding and fell vertically, landing on my head. I had to wear a brace on my head for four months and a hard collar for another three. I was like those wobbly toys that fall over the time. It was tough, but I knew there’d be an end and that that thing would come off eventually.

When it did, the doctors were able to look more closely at my injuries and they found that a ligament that goes between my spinal cord and brain had been severed. They said any impact or a knock would be the end of it for me, so I shouldn’t ever drive a car again, let alone get back on a horse.

I was devastated. I was only 42 – I wasn’t ready to retire, but I was being told that I was finished. It was a hard time and I didn’t ride for two years. I was quite low and, while I did a bit of weekly physio to get my neck to bend, really, I sat about doing nothing getting on the nerves of my then-partner Bettina and my sons. It was difficult for them because they’d seen me riding all the time, it was my job. Still, Dan was convinced I’d ride again and he was right.

In 2002, I went to see a surgeon in Germany who had been recommended and he told me I was healing well. The ligament was growing and, he told me, one day I’d be able to ride again. I couldn’t have been more thrilled, the only difficulty was that I had to let it heal and wait for the right time.

That time came just a few months later. I got on Arko III – a horse I’d ridden a few years earlier. Some friends and relatives didn’t want me to ride again – they were concerned about my health and another fall. But I wasn’t nervous. I thought, you can’t worry about that. If you want to do something you’ve got to go and do it. Don’t look back. Keep going forwards.

It worked. The movement in my neck came back over time – though it probably took 10 years for it to get 100 per cent mobile. I still don’t move like a normal person does and if I hit my head, it gives it a jolt, but I’ve been lucky. I managed to recover from that accident and my hip replacement, too. I’d needed it because I was having trouble walking. Unlike my neck, that healed after a few months, but as soon as I was healthy again I had an operation on my shoulder. It meant I was out for about seven months in total. But my hip replacement is ceramic and has a 45-year lifespan, so hopefully it’ll see me out. I don’t really think about it now – I only notice when I have to get on to the horse with a pair of step,s instead of jumping on like I used to.

After all of this, getting the gold in Rio was all the more amazing. The support from the public has been incredible. I’ve had a letters, emails and messages from so many people – even people who don’t know much about riding. Older people have said how inspiring I am. My gold makes them want to get up and do something. They admire what I’ve done and I’m so grateful for the support.

The equestrian team has even been nicknamed ‘Dad’s Army’ by the public. It’s probably quite accurate. John Whitaker is 61, while his brother Michael is 56, so we’re normally the eldest at every event. But we’ve been the backbone of the British Riding team for the last 30 years. We grew up as young riders together and we’re lucky we’re as talented as each other. We’ve never got into an argument.

John will never give up. He won’t ever retire until the day he can’t get on a horse. But I think the time for me to retire is getting nearer. I want to keep going for my horse’s sake – he’s still got a few years left in him and he enjoys jumping. It would be selfish for me to retire and retire him, so I’ll continue competing internationally for a while. I’m certainly not going to give anyone else the pleasure of riding him. Ever. He’s a very special horse.