Nick Skelton and Big Star: Ceremony with the Queen / 14 Sun 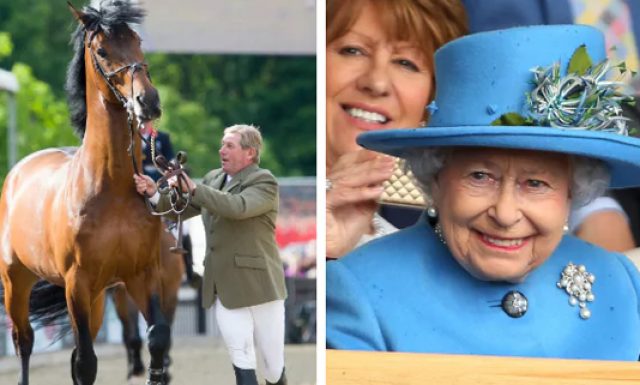 Veteran show jumper Nick Skelton raised a smile from the Queen as his horse made sure it was centre of attention at their last hurrah together.

Big Star, with whom Skelton has attended two Olympic Games, bucked its hind legs as the pair walked around the arena on the final day of the Royal Windsor Horse Show on Sunday. The Queen, known for her love of the animals, watched on from the Royal Box as Skelton, 59, and Big Star bid an emotional farewell to showjumping at their joint retirement ceremony. He has won more championships than any other British competitor and has taken part in six Olympic Games. In Rio he became Britain’s oldest Olympic champion in more than 100 years when he took the individual show jumping title, riding on Big Star.

Fans were stood several deep outside the arena, craning for a view as Skelton rode through a guard of honour formed by officials and riders.

“From the day we bought Big Star when he was five-years-old, I had it in my mind that he could win an Olympic gold medal,” Skelton said. “He has been an outstanding horse, and he has never let me down.

“I have an amazing team around me, and I have been very lucky all my life.

“I’ve had the most wonderful horses, great owners and great sponsors, and I am very proud of what I have done.

“I would do it all again if I could.”

Speaking to the Daily Telegraph this weekend. Skelton said he had had “a good innings”. He said from the moment he met Big Star, he knew the animal had the “X-factor you look for”.

“Without him I definitely wouldn’t have been there in London and Rio,” he said.

The horse is also retiring from competition, and will go to stud.

Skelton will continue working with young horses at his base near Alcester in Warwickshire, while also closely following the racing fortunes of his sons.