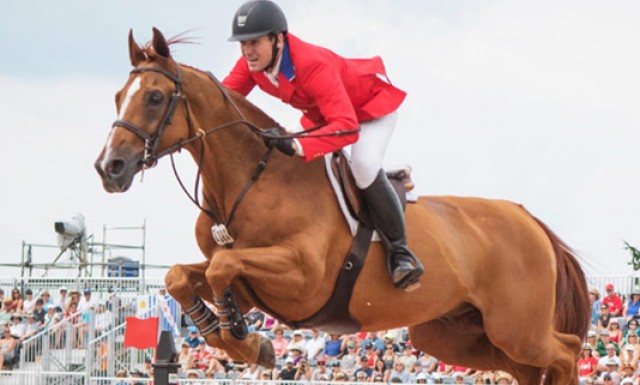 By Louise Parkes for Horsetalk

Thursday’s team tussle was an intriguing battle that proved unpredictable to the end when Argentina filled silver medal spot ahead of the USA in bronze. And it continued in the same vein when the individual medals were decided in a two-way jump-off for gold and silver as well as a five-way race for the bronze. Venezuela’s Andres Rodriguez went head-to-head with Ward, and although he had to settle for silver his result reflected the consistent theme of the week. The quality of the sport in the region has improved beyond recognition in recent years, and the normally dominant sides had to fight very hard indeed to claim their fair share of the spoils. Olympic qualification was also hanging in the balance since the action began last Tuesday, and it was Canada and Argentina that claimed the two team berths for Rio 2016 while two individual qualifying spots were earned by both Colombia and Venezuela, and one each by Uruguay and Peru.

The individual final was a nail-biter that went right to the wire, and Argentina’s Jose Larocca Jr (Cornet du Lys) was one of just three, from a starting field of 35, who returned a zero score in the first round to leave him on level-pegging with McLain Ward and Venezuela’s Andres Rodriguez. But a mistake in the second round saw the Argentinian battle it out in the five-way jump-off for bronze that took place between all the four-fault riders before the final contest for silver and gold began.

And Larocca was pushed off the medal podium when the USA’s Lauren Hough added nothing to her first-round error with Ohlala to take the bronze.

“I had to fight hard for it!” Hough said after producing the only clear of this jump-off. “For my horse this was her first Championships but she’s done events like Aachen and she seems to get better as the week progresses. I would say the fault I had in the first round, I was too polite at the double planks, but I had a nice position in the jump-off, the three ahead of me had rails down but the one behind was a quick horse so I took a bit of a risk” she explained.

Venezuela’s Rodriguez led the way in the jump-off for gold, and left the door open when racing home with Darlon van Groenhove in the fast time of 39.45 seconds, but leaving one element of the double on the floor.

“I was a bit too careful at the first part and had the back part of it. I was very fast because I knew McLain was coming behind, so I risked a bit,” he explained. Ward kept a cool head to return a clear in 42.89 to take the individual title, admitting that, as so often happens, luck played a part in the end result.

“My game plan was to ride the first five fences fast to try to win it two ways – if I had a fence down I would still be fast enough – and I was lucky at the last (fence), I gave that a bit of a rattle. But I’ve never won a big one without a little bit of good fortune!” said the 39-year-old three-time Olympian.

Ward said he knew the courses would get bigger as the week progressed, and that would suit his horse, Rothchild. “He’s a blood horse and a stamina test suits him, but today I knew I couldn’t make a mistake – it was a tough day’s work!” he said.

Ward was also on the winning US team at the previous Pan-American Games in Guadalajara, Mexico in 2011 where he also finished individually fourth.