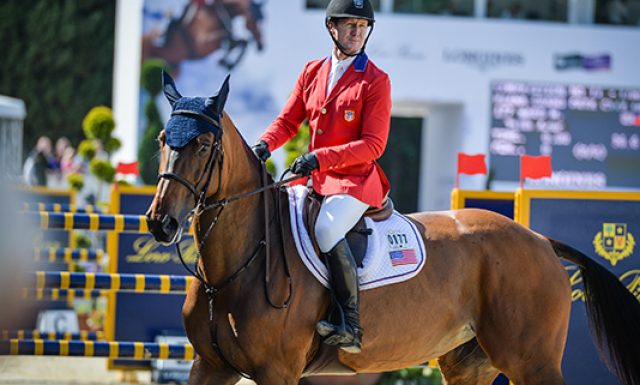 By Esther Hahn for Noelle Floyd

McLain Ward’s new position as World Number One is a career first for the show jumping veteran. The New York native rocketed from fourth to the top position in the Longines FEI World Rankings to overtake France’s Simon Delestre, who held onto the number one position since early March. The change in the world rankings comes as little surprise to those tracking recent results and noting Ward’s impressive string of wins on two continents over the course of the month.

The win streak began two weeks ago at his hometown show at Old Salem Farm, where he produced a win on not only his trusted Rothschild, but he also surprised crowds with a head-turning performance from one of his younger mounts, Tina la Boheme, to take home victory in the $130,000 Empire State CSI3* Grand Prix.

Ward’s winning ways continued across the Atlantic in Rome, Italy, where he won two major classes aboard HH Carlos Z and guided HH Azur to a double clear for a team second place finish in the Furusiyya FEI Nations Cup in addition to an impressive win in the €200,000 Loro Piana Grand Prix City of Rome CSIO5* on the final day of the event.

Back to the United States, Ward piloted Tina La Boheme to two more international wins at the Devon Horse Show and Country Fair CSI4*. Additional points from his recent Devon success have yet to be added to his overall total for the FEI World Rankings, so it’s to be expected that Ward has intentions to hold onto the title of World No. 1 for another month.

Previous World No. 1, France’s Simon Delestre, and No. 2, Germany’s Christian Ahlmann, each fell one rank to be No. 2 and No. 3, respectively.