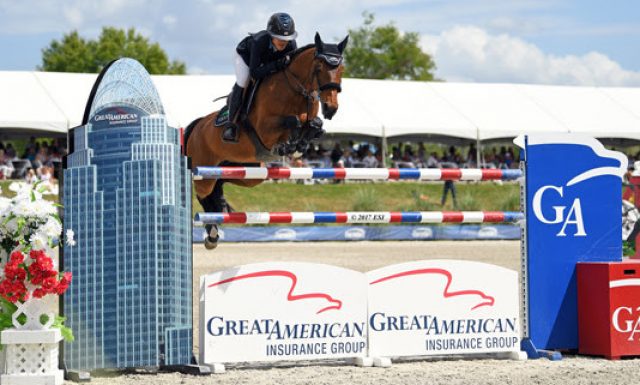 Spectators filed into the grandstand at HITS Post Time Farm to witness a world-class line-up of national and international riders battle for the blue in the fourth-annual Great American $1 Million Grand Prix, sponsored by Great American Insurance Group. Just one week after the AIG $1 Million Grand Prix in Thermal, California, the richest prize purse in show jumping returned to the Horse Capital of the World in Ocala, Florida.

With a bustling grandstand, thousands watching from a live webcast on HITS TV, two sold out VIP tents, and the grass berm surrounding the stadium filled to capacity, it was a day packed with family-friendly fun and world-class show jumping competition.

The final lineup was stacked with previous HITS $1 Million Grand Prix winners, but the team to beat was USA equestrian Lauren Hough and Ohlala, owned by The Ohlala Group. Hough returned to HITS Ocala after competing for Team USA at the FEI Nations Cup™ earlier in February. Hough also placed fourth in the Great American Million in 2015 and 2016. They topped the leaderboard, and 49 other show jumping stars, to take home the day’s top honor by less than a one-second margin over second place finisher Aaron Vale and Finou 4, owned by Thinkslikeahorse and Don Stewart.

“I was lucky enough to come back to Ocala after the Nations Cup, and I was so impressed with how the footing was,” said Hough. “My horse is happier here, and so I really made coming back a priority in my schedule.”

Coming back to HITS Ocala certainly paid off for the decorated equestrian of Wellington, Florida. Hough’s round held up over the 14-horse jump-off, going seventh in the order, right in the middle of the pack. Vale was not far behind, finishing less than one-second behind Hough for second place.

“Everything I did with my horse this winter was aimed at this class,” said Vale. “This second place finish is worth more money than any win I’ve ever had, so I’d say it was a pretty good day!”

“This Million dollar class is a very good thing that HITS does for our sport,” said Thieme. Thieme also won the 2011 Saugerties $1 Million Grand Prix.

Thieme rode Conthendrix to the third-place prize in just one second behind Vale for the yellow ribbon and his slice of the million dollar pie.

“Here in Ocala we have the best footing, and it’s amazing how well the horses jump here,” said Deeg. “We had some top riders here, like the ones sitting next to me [at the press conference.] We also had some less-experienced riders at this level, so I built this course being aware of everybody.”

First of the top five to challenge the shortened course was Great Britain equestrian, Ben Maher, piloting Don Vito, owned by Poden Farms. They set down a fault-free trip in 50.874, which would ultimately slide them into fourth place.

American rider, McLain Ward, was next to try his luck in the jump-off riding HH Callas, owned by Double H Farm. Ward, a two-time HITS Million Grand Prix winner, competed alongside Hough in the FEI Nations Cup™ Ocala earlier this season, and both were a part of the winning Team USA at Nations Cup Ocala last year.

Ward steered his mount through the course with precision and skill. To the sound of cheers from the crowd, they crossed the timers clear in 51.379, eventually settling them in the final spot of the top five for the fifth-place prize.

Hough and Ohlala followed Ward. They took to the course at an all-out gallop, zipping through the turns. The excitement from the crowd grew throughout the round and cheers erupted as they crossed the timers in a blazing fast 48.966, setting the Great American Time to Beat and topping the rankings, where they would remain for the eventual win, an impressive feat going in the middle of the order of 14 challengers.

“I was not feeling very confident in actually winning the class, because there were seven more behind me [in the jump-off],” said Hough in the post-victory press conference. “I rode the fastest round that I could with [Ohlala], and tried to keep the pressure on the ones to follow—and of course, you always hope to have a bit of luck on your side at events like this, I had all of the above.”

Andre Thieme was next of the top five to complete his jump-off round. He and Conthendrix valiantly fought for speed towards the finish. As they crossed the timers in a cool, clear 50.086, they stepped up the leaderboard over Ward, but were not quite quick enough to overtake Hough.

“I watched Lauren’s round at the gate, and I knew her horse was very fast, and my horse is not so quick across the ground,” said Thieme. “He’s an amazing horse and partner, but I know him well enough that if the jump-off starts to get really quick, I will probably not win it. So with that in mind, I did everything that I could and am very happy with this result.”

When hometown hero, Aaron Vale, stepped into the ring with Finou 4, he had his eyes on the prize. He laid down a speedy ride through the jump-off course, galloping at every opportunity to shave time off the clock. The talented pair crossed the timers clean, but they were unable to catch Hough’s time as they finished in 49.442, good enough for the coveted, second-place payout.

“Following Lauren, I got to watch the first seven go, so I had an idea of what my horse could do,” said Vale of his jump-off round. “I was hoping to get one less stride from the first fence to the second, which I did, and I almost got exactly what I wanted the whole way, aside from one extra stride in the middle. I felt like I made up for it in the turn to the last line, and leaving out a stride to the last jump. I got the best round that I think I could have, it just wasn’t quite good enough today.”

Several big contenders followed in the jump-off including Todd Minikus, winner of the 2014 Saugerties Million riding Valinski S, owned by Michael Dorman and Wyndmont, Inc. Although he had the fastest time in the jump-off, 46.660, a rail and four faults earned him in sixth. < Last to go in the jump-off was last weekend’s AIG $1 Million Grand Prix winner, Mandy Porter and Milano, owned by Abigail Weese. As she started the course, it looked like she might be the first back-to-back Million Grand Prix winner, and she carried a clean round all the way to the last fence getting the crowd to their feet to cheer. The stadium let out a collective sigh as the last rail came down for four faults, giving Porter the purple ribbon for seventh. It was unanimous amongst the top finishers that the prize purses offered by HITS are remarkable and HITS President and CEO Tom Struzzieri gave full credit to the event’s title sponsor. “We’re fortunate to have one of the best sponsors in the world, Great American [Insurance Group], and lucky to have them again for the fourth consecutive year,” said Struzzieri. “The fact that we can host two $1 Million classes back to back, for several years in a row, speaks volumes as to what HITS does, and that caliber of competition will certainly carry into the future.” As ten weeks of show jumping competition at HITS Ocala came to a close with a $1 Million Grand Prix to remember, riders are already looking ahead to the HITS Championship in Saugerties, New York, later this year. Boasting the richest weekend in show jumping and with the Saugerties $1 Million Grand Prix returning as an FEI CSI5* class, riders from around the globe await another opportunity for their chance at international bragging rights and the quintessential prize purse.