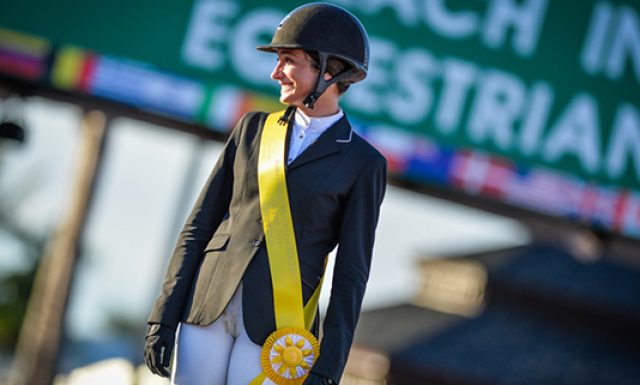 By Erin Gilmore for Noelle Floyd

As summer was ending on the East Coast, Catherine Tyree strode across the grass field of The Hampton Classic, pacing out the strides between fences. It was only if you looked very closely at her gait that a slight hitch in her step was noticeable.

Twenty three year old Tyree was just three months back in the competition ring on Labor Day Weekend, after spending six months recovering from an injury and setback that went much deeper than just the fractured bones in her foot.

Yet, this past week, as she walked the course during the opening week of the 2017 Winter Equestrian Festival, in Wellington, Florida, the subtle limp was gone, and Tyree put in the kind of performance that has become her trademark since she made her summertime comeback: quick, clean, and right up there with the best of the best.

It was almost exactly one year ago that the Illinois native was also competing in the International Arena, in the 1.45m jumpers during the opening week of WEF 2016 with her 11-year-old mare Free Style VH Polderhof. After a clear round, she brought the chestnut, Belgian-bred jumper down to a walk to prepare for the jumpoff round. But Free Style suffered a sudden, cardiac event and fell on her side to the ground. Tyree was caught in the fall, and her foot was crushed in five places. An equine ambulance was at their side almost immediately, but Free Style had passed away.

It was a terrible blow for the talented young rider who truly loves her horses. At the very start of winter season, she found herself sidelined with an injury, but worse, she was suddenly without one of her best horses. Free Style was Tyree’s partner throughout the 2015 season in the high junior amateur/owner jumpers, and the U25 division. As Tyree rose through the ranks, Free Style rose with her.

It would be four months until Tyree could slowly return to riding, but she didn’t shrink away from getting back into the ring. As she tells it, her trainers John Brennan and Missy Clark of North Run Stables were the key to her support system, but it also took a heavy dose of tenacity for Tyree to come back the way she has.

“I really owe it all to them and to North Run,” Tyree said. “John and Missy are incredible trainers and incredible people. When I got back and my horses were ready to go, I felt very confident throughout all of this.”

With the support of her family, Tyree holds the reins of a string of talented, top quality horses that include Enjoy Louis, Bokai, Don’t Go, and Corleone. She’s been training with North Run for several years, and she never misses a chance to express her gratitude, both for having access to the level of riding that she’s blessed with, and to the North Run team for always having her back.

Tyree swiftly made the rounds of the East Coast summer circuit, placing more often than not at HITS On the Hudson, Lake Placid and Vermont. Among her many wins was victory in the $50,000 Vermont Summer Celebration Grand Prix at the Vermont Summer Festival aboard Don’t Go, and a strong showing at the aforementioned Hampton Classic, where she briefly wore the Longines Leading Rider armband.

She continued that form through the fall, with a pair of FEI CSI4* wins at Old Salem and Washington, and showed off a skill for multitasking as well, as she entered her senior year of university at Northwestern.

And on the one year anniversary of Free Style’s passing, Tyree stepped up again, and earned the WEF 1 Leading Lady Rider title. It was Sunday afternoon, and she’d just finished her week at WEF with a strong 3rd place aboard Bokai in the $75,000 Rosenbaum Mollengarden PLLC Grand Prix, giving her a lot to look forward to for the winter circuit to come.

“I’m going to hope to do some of the Saturday Night Classes,” Tyree detailed. “I have another grand prix horse that will balance each other out and rotate throughout FEI and hope for the best and get a lot of experience at this top level of competition.”

The sun was low in the sky when Tyree stood in the International Arena with an armful of flowers as Leading Lady Rider. The dusky light was golden, what some might say a chestnut color. There’s no doubt that the memory of her mare was heavy on Tyree’s mind as she smiled for the cameras. But on an anniversary that Tyree will never forget, she closed the door on that terrible day, and replaced it with a triumphant one, that very fittingly honored the memory of Free Style VH Polderhof.

Catherine Tyree on the podium following the WEF 1 grand prix.