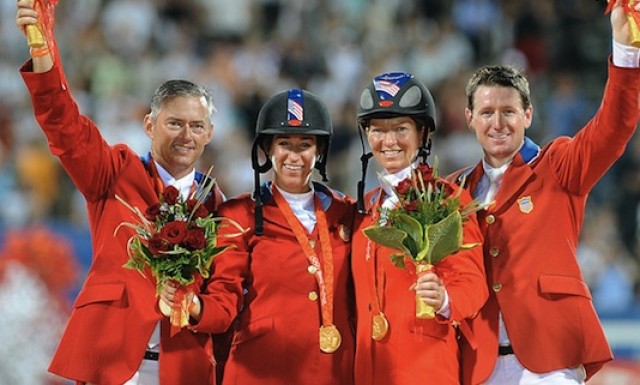 By Jackie McFarland for ProEquest

Elizabeth ‘Beezie’ Madden had a whirlwind week of competition at Hickstead 2014 in Great Britain. It may seem that it would be Olympic level riding as usual, but this was her first major competition after breaking her collarbone last May. I caught up with Beezie Madden directly after she won the Longines King George V Gold Cup at Hickstead on Abigail Wexner’s Cortes ‘C’ last Sunday. Not to mention that on Friday she and Cortes ‘C’ were double clean in the Furusiyya FEI Nations Cup™, one of two riders on the US Team to jump without fault, which sealed the win for the United States. Note that those two classes equals four clean rounds, including a fast jump-off round that beat some of the best show jumpers in the world.

That said, considering her accolades, including 2004 & 2008 Olympic Gold Medals and 2013 FEI World Cup Finals Champion, to name a few, Beezie is easily one of the best in the world herself.

With a busy show schedule and a string of top horses, there just isn’t much room for time off, vacation and especially for an injury. However even riders at the top of their game have falls. And Beezie had an unfortunate mishap occur at Old Salem last spring. I asked Beezie about the experience, how she handled it, what it is like to be back on top already and what advice she has for riders when they sustain an injury. She kindly took the time between major events, Hickstead and Dublin, as she heads to the CSIO5* in Dublin this week.

She has come full circle and here’s the story.

What do you remember about your fall that day? Did Breitling slip?
My fall with Breitling was at the water jump. It was a bending line to it, and I had to hold up to fit the strides in. When I went to push him again (anticipating that he would spook a little), he got confused and left a stride early. This made it impossible for him to make it over the water. I am not sure if he slipped in the water, or fell because he realized it was a bad idea to leave the ground, and he tried to put his legs back down again, but somehow he fell as well. Luckily he was fine.

When was the last time you were sidelined with an injury?
I really have not been sidelined much for injuries. I have had surgery on both shoulders before, but it was a scheduled surgery, and I had it done in the fall when I was done showing. So it really did not sideline me much. I ended up having to unexpectedly repair the rotator cuff in the last shoulder surgery, which put me out for a little longer than we had planned and I missed the first few weeks of WEF.

Aachen was more of a question mark, since it would have been almost eight weeks after surgery. The likelihood of having the horses and myself ready to take on Aachen were slim. I would have wanted to compete in at least two shows before Aachen to build up to that level of competition.

Since it was difficult to know exactly when I would be back riding again, we (myself, John, and Robert Ridland) decided it was in everybody’s best interest to take me off the list for Aachen right away. That allowed for another short listed rider to be able to plan to go to Aachen, and it still left me the opportunity to go to Hickstead and Dublin as my observation events. Since those two shows were the last observation events, waiting allowed for me to have the maximum time available to be ready to compete. To prepare, we scheduled in a 2* show in Koningsbosch, Netherlands (July 10th-13th) and another one in De Wolden, Netherlands (July 17th-20th).

How did you handle your top horses – all your horses – who did you bring in to keep them in shape?
Luckily my top horses all had enough experience that they did not need to show while I was recovering. My assistant Emily Gailis did most of their flat work and fitness work. To keep them jumping fit, Johan Heins flew to our farm in Cazenovia two times during my recovery to jump them. We had him come because whenever we go to Europe to show, we stable at his home in The Netherlands. So he has ridden and jumped my horses to get them ready for shows many times before.

How long after surgery until you were back in the barn?
I was back in the barn about a week after the surgery, but not doing much. After about two weeks, I was in Spruce Meadows helping to train our students there. The pain was not so bad. I was given some drugs to help with pain management right after the injury. I think I only used them during the day for about a week. I took them at night to help me sleep for a little longer.

Did you follow your doctor’s orders to a ‘t’?
I can’t say that I followed the doctor’s orders to a “t”, but pretty close. I was lucky enough, because of some helpful contacts, to have Dr. Altchek at the Hospital For Special Surgery in New York take care of me. He is used to working with athletes, so we were able to work out a schedule with him so I could be ready to go by the latest date that we thought possible in order for me to be ready for my observation events. We also kept in close contact with Robert Ridland when we were designing my schedule.

My surgery was on May 20th and I was supposed to wait to ride or do much else with it until I saw Dr. Altchek again on June 30th. I was able to get some physical therapy to help with my range of motion in the meantime. I got anxious to do away with the sling after about three weeks, and started to wean myself off of it then. I also wanted to start strengthening my arm, so I went to Wellington, FL for about five days on week four of my recovery to work with Ed Smith, who was my physical therapist when I rehabbed my rotator cuff. He also rehabbed McLain Ward when he broke his knee. At the same time, I worked out with Tony Cabralles, who John (my husband) and I train with whenever we are in Wellington. This way, I was able to get started on a program that I could continue on my own.

I still keep in contact with Ed, who sends me new exercises by video as I progress in my rehab. I also snuck in a light hack on one horse a day on week five of my recovery. Then on week six, I had my follow up appointment with Dr. Altchek and he gave me the go ahead to start really riding as long as I didn’t fall off. This sounds funny, but really, I was to take as few chances of getting into trouble as possible, at least for a few more weeks.

So I was riding and jumping again six weeks after my surgery. But through specific exercises I had prepared as much as I could in the interim.

What was your plan once you got back in the saddle?
On week seven, I was at my first scheduled show in Koningsbosch, Netherlands, but just doing small classes. I did not do the Grand Prix even though I had Simon and Cortes there. On week eight, I was at my second show in De Wolden, Netherlands and I did do the big tour there, which was 1.45m. Simon was 8th in the ranking class during the week, and Cortes won the Grand Prix. This was their last prep for Hickstead.

I had an amazing week in Hickstead. Our plan was to use Cortes there as my top horse and use Simon in the classes that would prepare him best for Dublin the next week. Cortes ended up jumping double clear in the Nations Cup, and he won the Grand Prix!

This was a real confidence building week for me. I was very happy to get through the first round of the Nations Cup, since that was our first big class since my fall. Luckily Cortes jumps around a 1.60m course like it is only 1.40m, so I did not really worry about the height.

I think all the time I spent watching other people win classes made me hungry to do some winning when I came back, so winning the Grand Prix at Hickstead was a very satisfying accomplishment. It is a nice feeling to have my horses and myself feeling so fresh at this time of the year.

What’s next?
Next I will be showing in Dublin, and then finding out right after that whether I have made the WEG team. I will compete with Coral Reef Via Volo and Breitling in the London Global Champions Tour show the week after Dublin. Then I have a couple weeks off before hopefully going to Normandy!

What advice would you give to other riders who sustain an injury?
My advice to other riders who get hurt, is to make sure to get with a good doctor and establish a diagnosis. In my case, it was obvious, but it’s not always the case. Then I think communication with your doctor is key.

I was lucky that I broke my collarbone when I did, because I had time to heal enough before I had to get going. If it had happened closer to the WEG, I would have been looking at taking a lot more risks in order to make the team.

The rehab is going to be different for different circumstances. That’s why my best advice, is to talk out your situation with your doctor. They can’t help you the way you want, for example to get back in the saddle, unless they know your situation. Most of the time, there is a way to get things done, but the doctors will often be conservative unless they are aware that you have possible deadlines to get back into action.

Beezie and an adoring fan

Remember if you go too fast and take a step backwards, your down time will be longer than doing it right in the first place. I saw Dr. Altchek 10 days after my surgery to get an x-ray and to get the sutures out. He told me everything looked great. Then he said, “don’t screw up my work”. This was the best advice he could’ve given me because I had just enough time to recover and get ready for Hickstead, but I didn’t have time to screw up and then fix it if I did screw it up.

So, in short, be aggressive in your communication with your doctor, but be sensible with your plan.

ProEquest thanks Beezie for her time, wishes her the best and looks forward to seeing her name in lights again and again.