Adult Amateur Goes To The Gym With Laura Kraut / 26 Tue 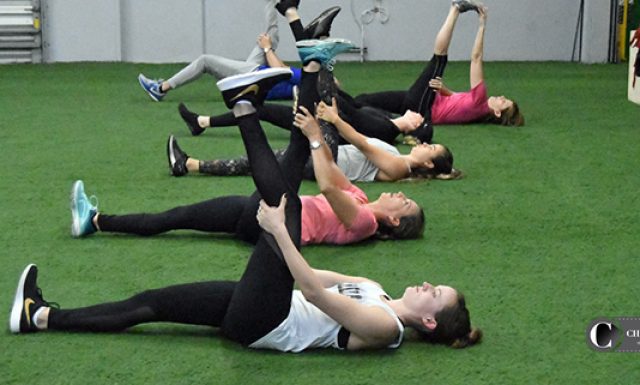 By COTH Staff Blog – Ann Glavan for The Chronicle of the Horse.

If you told me a year ago that I would one day willingly volunteer to go to the gym and workout with professional athletes, I may have fallen off my couch laughing. I am the queen of physical inactivity. I compete with my friends and their FitBits to see how few steps I can take in a day, and I ALWAYS win. If I didn’t have a horse to go ride and feed there would probably be a human-shaped dent in my couch from the amount of undisturbed time I spend there watching reruns of various crime and science fiction TV shows and “The Office” for the 80th time.

And yet somehow, here we are—about to embark on a blog series chronicling how I voluntarily went to the gym with some of our U.S. Olympic team riders to see how the thoroughly average amateur rider fares in a professional athlete’s workout.

Before I volunteered to go to the gym with a bunch of professional athletes for my job, I avoided the gym like it was my job.

Sure, I did sports nearly a decade ago in high school—I ran cross-country and was halfway decent at it, mostly because the faster you run, the faster you’re done. And cross-country is, like, 50 percent running, 50 percent team dinners and social functions. As an adult I am quite content to skip the running bit to more fully dedicate myself to the social outings.

I went to a free CrossFit class with a friend once because I thought the rope climbing part looked fun, and it was. That one time. I went to a rock climbing gym in Lexington, Kentucky, a couple times; went to a boxing place once; and an aerial yoga studio for the Instagram pic. I ran the 5K at the Kentucky Three-Day Event to defend the Chronicle’s honor in a media company face off. We won, but my severely overtaxed and underprepared self nearly passed out at the finish line.

You get the idea—I try to workout with regularity that varies between bi-monthly and annual.

In the past couple months, however, I’ve been duped into going to a gym far more frequently than I would like by one of the trainers at the barn where I ride. I live in an apartment above the barn, so said trainer, Alex, is also my neighbor, and she wanted a gym buddy. A few times a week, she shows up outside my apartment and sends a vaguely threatening text that if I don’t wake up and get in the car she will ensure my stirrups are lost and never heard from again.

So there I was a month or so ago, having been brought to the gym against my will, sprawled on a yoga mat and asking if it was time to go to Starbucks yet when I had a thought. I used to write about trying different equestrian sports I had never done before, like vaulting, reining and driving, and we all had a good laugh at what the average person looks like when attempting to keep up with people at the top of their discipline. (You can read those here).

So what if I, one of the least fitness-oriented humans around, went to the gym with professional athletes and attempted to work out with them? Wouldn’t it be cool just to see what a top rider’s workout looks like, and then also marvel at the wonderful spectrum of physical ability between an Olympic athlete and a potato?

Thanks to some very game and accommodating U.S. athletes, I found myself heading to Wellington, Florida, to workout with Beezie Madden, Laura Kraut and Kasey Perry-Glass, with a stop in Aiken, South Carolina, to hit the gym with Boyd Martin.

First up on the docket was Laura Kraut. You know Laura. She won a team gold medal at the 2008 Olympic Games in Hong Kong? Was on our gold medal-winning FEI World Equestrian Games team in Tryon, North Carolina? She’s represented the United States on many Nations Cup teams, and she’s won too many grand prix classes to count. I met Laura at her Athletes Advantage gym to tag along in her small group training session, and joining that small group was her regular workout buddy and partner, who also happens to be individual Olympic gold medalist from the 2016 Rio Olympic Games, Nick Skelton.

So yeah, the low adult jumper/beginner novice eventer was in good company.

I tried to feel out how much I’d gotten myself into while we warmed up, asking Laura how often she goes to the gym and what she usually does. The warm-up should have been a pretty good indicator that I was in for it because Laura said she generally starts with 10 minutes on a treadmill, or some other kind of machine, just “loosening up.” On my laziest days 10 minutes on a treadmill is an entire workout.

Upon hearing about my usual fitness routine Laura laughed and correctly predicted, “You may not be able to get off the toilet tomorrow.”

We then moved on to some stretches and down and back jogs before we set in on the workout in earnest. The workout was 10 different exercises broken into two groups of five. We all lined up and rotated through the five exercises five times, had a short break, and then did the other five.

Also joining us for the workout was Laura’s longtime friend and bookkeeper, Viviane Garner. When she heard the premise of this blog, she offered the best advice anyone gave me that day: “Don’t be a hero. Stop lunging that deep. That’s going to be killer tomorrow.”

If you’d like to try the workout yourself at home, here’s the list of the 10 exercises we did, listed in descending order of tortuousness.

1 & 2. Hammer swings, one set for each arm. You swing the weight down between your legs in a squat, and then you stand up and swing it up about level with your face. I got a lot of critique from trainer Ed Smith on my form for this one. Apparently equitation is a thing in the gym too, and slouching over to lift entirely with your roached back is frowned upon.

3. Rope tricep curls. Basically it’s a standard tricep curl, but the rope provides resistance. (You can see Laura demonstrating in the picture below.) I thought this one looked kind of cool and not that hard, but it’s deceptive—you don’t move a whole lot, but your arms are BURNING by the end.

4. Squat with weight. This was one of the moves I thought really translated to riding—basically we were squatting in kind of a two-point position with a strap around the weight, and then you bring your hands to your chest. It felt like good practice for when you go flying like a bat out of hell into the two-stride line your trainer specifically told you was a quiet two and really need to whoa.

5. Ladder run. This one was fun; it was basically like a little tap dance across the astroturf. I think it’s how you would teach a human to passage.

6. Squat jumps. I thought the TRX bands you get to hold would make this one easier, but it just means you can squat deeper.

7. Lunge with ball & 8. Stationary lunge. For the first one, you lunge across the floor with the medicine ball; for the stationary one you hold the medicine ball and jump back and forth quickly between lunges. This is where Ann made that critical over-lunging mistake that resulted in being unable to rise unassisted from a sitting position the next day.

9 & 10. Running down the hall and back, included in both sets. You may be thinking, Ann, running? That’s at the bottom of the list; that’s your favorite activity on this list? It is my favorite when it’s down a long back hall by yourself. This gym was set up so that you were basically just gone for 15 seconds when you did this little down-and-back sprint. You get to have a little, private, “come to Jesus” moment where you can talk to yourself, and tell your poor little soul that is threatening to leave its tortured body that she’ll get pancakes if she just powers through this next rep.

I did manage to keep up in the workout, but before I could take my victory lap I made the mistake of asking Laura where she was off to next, and she informed me that after the workout she usually stops by a pilates studio for some core work before heading home. She leaves the gym to go to another gym, and she does another workout, on Monday. Her day off. So yeah, I’ll see myself out.