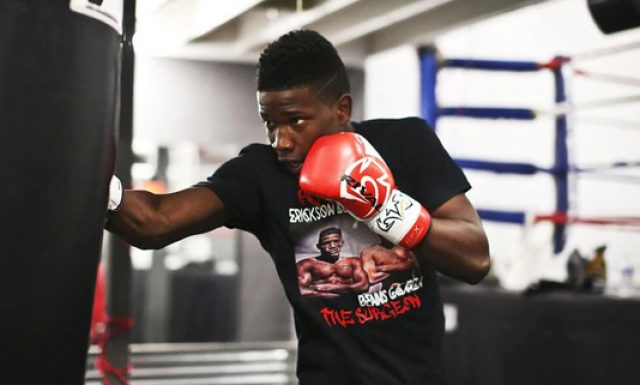 Written by Stephen Ruiz for the Orlando Sentinel.

After the only loss of his professional boxing career, Erickson Lubin of Orlando continued his resurgence Saturday night in Houston.

Lubin, 23, defeated Zakaria Attou of France by technical knockout at 1 minute, 19 seconds of the fourth round during their super welterweight fight at NRG Arena. It was the third consecutive victory for Lubin (21-1, 16 knockouts) since Jermell Charlo knocked out him in the first round of a title fight in Brooklyn, N.Y., almost two years ago.

“I feel like I just came ready,” Lubin said during a news conference. “I was just a few steps ahead from the beginning bell. I knew I was going to come out here and dominate.

“After a few shots, he looked hurt. I was going to keep teeing off until he was down or out. ”

Attou (29-7-2) said he injured his right arm against Lubin in the third round of a match that was televised by Showtime.

The victory puts Lubin possibly in line for a title shot against reigning champion Tony Harrison.”

My next fight won’t be for a world title, but I definitely want to get in there with a top-10 kind of guy,” Lubin said. “I just want to prove that I’m one of the top dudes.”

Lubin’s victory in Houston came on the undercard of Jermall Charlo’s successful defense of his middleweight title against Brandon Adams by unanimous decision.

Jermell and Jermall Charlo are twins.