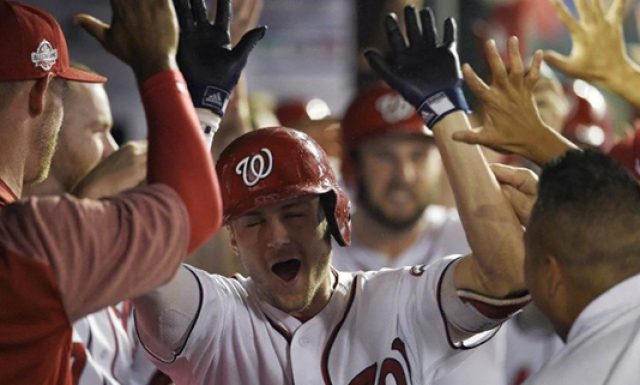 If you left Thursday’s Nationals-Marlins game early or changed the channel after Washington fell behind 9-0, you missed a doozy of a comeback that may or may not be looked at as the turning point of the season in three months. Here are nine numbers from the Nationals’ wildest curly “W” of the year, a 14-12 win that pulled them back to .500.

9: Runs the Nationals trailed by entering the bottom of the fourth inning before mounting the largest comeback in team history. Washington blew a 9-0 lead to the Braves at Nationals Park in 2012, but it had never come back from such a deficit. Dan Uggla fueled the Nationals’ previous largest comeback, from eight runs down to beat Atlanta on April 28, 2015, at Turner Field. Thursday’s win also matched the largest comeback in franchise history. The Expos defeated the Giants, 14-13, after trailing 11-2 on May 16, 1997.

I’m not sure what the odds were of a team blowing a 9-0 lead that had allowed 9 runs in one of its previous 27 games – when playing a team that had just failed to score 9 in its previous series.

But the #Marlins pulled that off against the #Nationals last night. Incredible.

8: RBI for Nationals shortstop Trea Turner, who got Washington on the board with a solo home run in the fourth inning and hit his first career grand slam to give Washington the lead for good in the sixth. Turner’s eight RBI were two shy of the franchise record set by Anthony Rendon last season and matched the MLB record for RBI in a game by a leadoff hitter. Boston’s Mookie Betts accomplished the feat last season. Before that, former National Ronnie Belliard did it as a member of the Colorado Rockies in 2003.

Trea Turner is the 6th leadoff man on record (since 1908) to have a game with at least 8 RBIs.

Mookie Betts did it just last year. Before that? Ronnie Belliard (!) in 2003.

Here are 8 reasons to #VoteTrea.

11: Excitement level (on a scale of 1-10) in the Nationals’ dugout after Turner’s grand slam gave Washington a 10-9 lead.

1.2 percent: The Nationals’ win expectancy, according to FanGraphs, after Justin Bour’s two-run homer in the fourth inning gave the Marlins a 9-0 lead. By the time Turner came to the plate in the sixth inning with Washington trailing 9-6, the Nationals’ win expectancy had climbed to 20.5 percent. After Turner cleared the bases, it jumped to 70.1 percent, resulting in the most win probability added on a single play by the Nationals this season.

103: Losses, in 103 games this season, by teams that trailed by at least nine runs before Thursday night.

4: Hits for Matt Adams in his return from a fractured finger that had kept him out of the lineup since June 15. Rendon and Bryce Harper combined to go 0 for 8 with a pair of walks.

14: Runs scored by the Nationals on Thursday, two more than the total number of runs they scored during the five-game losing streak that they snapped with the victory.

1-0: The Nationals’ record since the club’s veterans called a players-only meeting after Wednesday’s loss to the Red Sox.

“We got to turn it around,” Nationals General Manager Mike Rizzo said Thursday on 106.7 The Fan. “We got to play better baseball. We can’t worry about the Braves or the Phillies or the Red Sox or the Yankees or anybody but ourselves, because the way we’re playing isn’t going to get it done. We have to play baseball like we’re capable of, like the history of these players are. If we do that, I think we’ll be fine.”

The Nationals still trail the Braves, who lost to the Brewers on Thursday, by six games for the NL East lead. Washington is five games back in the wild card race.

0: Difference Thursday’s comeback will make if it doesn’t spark a winning streak before the all-star break. The last time Washington had a dramatic comeback win that felt like a potential turning point — an 8-6 win over the Phillies on “Sunday Night Baseball” two weeks ago — the Nationals responded by being outscored 12-0 in a two-game sweep at Tampa Bay.

“Hopefully,” reliever Shawn Kelley said of Thursday’s win, “that’s something we look back on in a month or two from now, or four, five months from now, and be like, ‘Man, that changed the course of the season.’ ” Trea Turner is congratulated in the dugout after his grand slam Thursday night. (Nick Wass/Associated Press)