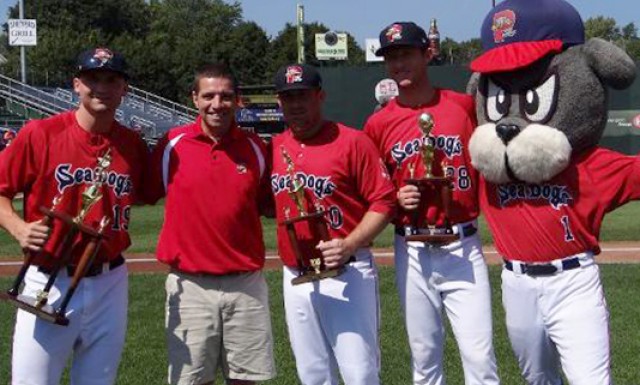 By the Portland Sea Dogs for milb.com

PORTLAND — The Portland Sea Dogs, the Double-A affiliate of the Boston Red Sox, presented their annual team awards for the 2015 season prior to Monday’s final game of the season at Hadlock Field. The team awards are voted on by the fans and are handed out in four different categories: Most Valuable Player, Pitcher of the Year, 10th Player, and Citizen of the Year.

Sam Travis was selected as Team MVP and William Cuevas as Pitcher of the Year. Tim Roberson earned the 10th Player Award and Mike McCarthy was named Citizen of the Year.

Sam Travis was promoted to Portland on June 25th after hitting .313 in 66 games with High-A Salem. After going 1-for-13 in his first four games, Travis hit safely in 10 of his next 11, establishing himself as a fixture in the middle of the Sea Dogs lineup for the remainder of the season. Travis reached base safely in 60 of 65 starts with the Sea Dogs, including 21 in a row from July 13-August 6. He also matched a team high with a 13-game hit streak from July 24-August 6. In the period since his promotion to Double-A, Travis ranks in the top ten in the Eastern League in batting average, hits, RBI, extra-base hits, total bases, doubles, walks, on-base percentage, and OPS. Travis also posted the best fielding percentage (.997) of any first baseman in the league (min. 50 games), having made just two errors in 63 games played. The 22-year old was selected by the Red Sox in the second round of the 2014 First-Year Player Draft out of Indiana University. The 2015 season is Travis’ second in the Red Sox organization.

Making his Double-A debut in 2015, William Cuevas quickly proved to be the ace of the Sea Dogs rotation. The righty from Venezuela won four of his first five starts to begin the season and was selected to the Sullivan Tire All-Star Classic at Hadlock Field, where he served as starting pitcher for the Eastern squad and worked a perfect first inning. At the time of his promotion on August 3rd, Cuevas ranked seventh in the Eastern League in strikeouts (91), seventh in opponents’ average (.233), and 13th in ERA (3.40). Despite making just 19 starts for Portland, Cuevas still is tied for the Sea Dogs team lead in wins (8), finished second in strikeouts (91), and has the lowest opponents’ average (.233) and WHIP (1.31) among qualified starters. The 24-year old was originally signed by the Red Sox as a non-drafted free agent on July 2, 2008. The 2015 season is Cuevas’s seventh in the Red Sox organization.

After beginning the season on the disabled list as the third catcher on the Sea Dogs depth chart, the name Tim Roberson didn’t bring much fanfare to the Sea Dogs roster to begin the year. That would all change by season’s end, as Roberson wildly exceeded expectations and proved to be a significant offensive contributor. The Florida native was activated on April 19th after missing the first nine games of the season and didn’t take long to have an immediate impact. Roberson hit safely in his first three games with Portland, and then made history by hitting for the cycle in his eighth game of the year on May 15th in New Britain. Roberson finished 4-for-6 in the game with a grand slam and a game-winning two-run triple in the 10th inning of a Sea Dogs 13-11 win. The cycle was the third in Sea Dogs franchise history. Roberson would go back on the disabled list from May 23-July 6 with a fractured finger, but continued to swing a hot bat in his return to Portland, hitting .351 (20-for-57) in 15 games in July. The 26-year-old was signed by the Red Sox as a non-drafted free agent on June 16, 2011. The 2015 season is Roberson’s fifth in the Red Sox organization.

Citizen of the Year – Mike McCarthy

Over two-and-a-half seasons in Portland from 2013-15, Mike McCarthy has become a fan favorite and a fixture in the community thanks his volunteer work and commitment to enriching the fan experience at Hadlock Field. McCarthy earns the Citizen of the Year Award for the second consecutive season. In 2015, McCarthy continued to spearhead the partnership between the Sea Dogs and the Baseball Miracles program to host equipment drives at Hadlock Field this season. All of the equipment received in the drives is donated to underprivileged children in impoverished areas. Throughout the season, McCarthy volunteered for various community appearances at local schools and participated in multiple baseball clinics held at Hadlock Field. He could often be found at the autograph table in the concourse before games and signing more autographs along the picnic area and at the first base gate after games. In 29 games (18 starts) for Portland in 2015, McCarthy went 6-8 with a 4.59 ERA (59 ER/115.2 IP). The California native was selected by the Red Sox in the 14th round of the 2011 First-Year Player Draft.