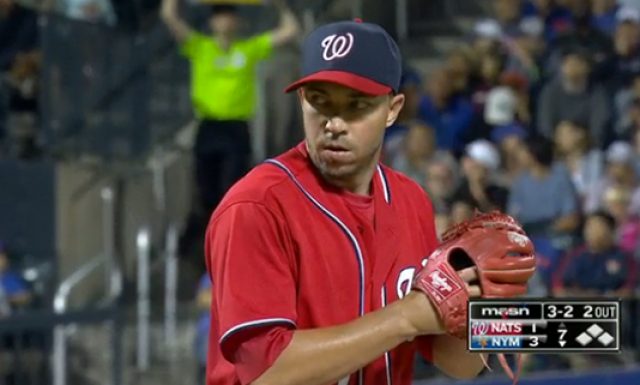 By Jamal Collier for MLB.com

As Nationals left-hander Sean Burnett ran in from the bullpen at Citi Field on Saturday, the thoughts started running through his mind of his long road back to this point.

Burnett was back with the Nationals for the first time since 2012 and about to pitch in a Major League game for the first time since May 27, 2014. He was with the Angels then, and tore his ulnar collateral ligament for the second time. He completed his road back from a second Tommy John surgery by getting Curtis Granderson to line out in the bottom of the seventh inning of Washington’s 3-1 loss to the Mets.

“There were some tough times and some tough days where I questioned whether my arm was ever going to feel good again to be able to get back to this level and be able to compete at this level,” Burnett said.

He admitted to being less nervous than he thought he would be, but maybe the familiarity of Citi Field — familiar to him from his initial run with the Nationals — made it easier. But he enjoyed hearing the noise from the 36,118 in attendance on Saturday night, especially compared with what he called the “dull crowds” he had been pitching in front of in the Minors.

“I guess I’ve pitched here so many times, I felt like I was part of the team again,” he said.
Burnett was with the Nationals in Spring Training but did not make the team. He pitched in the Minors for three organizations — the Dodgers, Braves and Twins — before being traded to the Nationals in August. He admitted to getting emotional when he learned he was going to be a September callup.

In 2012, Burnett was an integral part of a Nationals bullpen that helped win the franchise’s first division title. He made 70 appearances for Washington then, with a 2.38 ERA.
Perhaps there is room for him to make an impact this year.

Washington carried three lefty relievers for most of the first half but traded Felipe Rivero to the Pirates in July. Oliver Perez has a 5.50 ERA. Sammy Solis had been effective, but he is on the disabled list with inflammation in his left shoulder, and his timetable is uncertain.

The Nationals did acquire left-hander Marc Rzepczynski from Oakland, but there could be another spot open.

“To be honest, I haven’t put much thought into that. I’m just fortunate for the opportunity to be back,” Burnett said. “However it goes, it goes. But I know I’m feeling good and I can compete. It was just good to get back on the mound and face big league hitters again.”

“We have all the faith in Sean Burnett, because I’ve seen what Sean Burnett can do,” manager Dusty Baker said. “The guy’s unfazed by pressure from what I remember from the other side. I think Sean Burnett is going to come up big down the stretch here.”

Jamal Collier covers the Nationals for MLB.com. Follow him on Twitter at @jamalcollier. This story was not subject to the approval of Major League Baseball or its clubs.