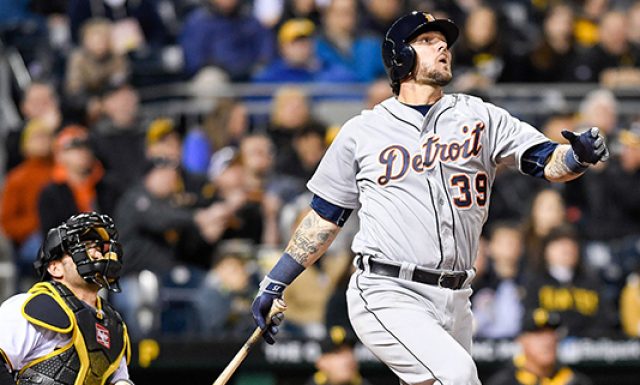 By Jason Beck for MLB.com

PITTSBURGH — The Pirates fan who caught Jarrod Saltalamacchia’s 100th career home run waited outside the visiting clubhouse at PNC Park with an offer. Saltalamacchia got his milestone home run ball from his go-ahead grand slam in Wednesday’s 7-3 win in exchange for an autographed ball.

“He had a ball he wanted me to sign. It was an easy trade,” said Saltalamacchia.

The Tigers didn’t have to trade for Saltalamacchia, only sign him for slightly more than the Major League minimum. So far, it has been one of the easiest deals of their offseason.

The Tigers signed Saltalamacchia in December to back up James McCann. With McCann expected to miss 2-4 weeks with a sprained right ankle, Saltalamacchia is Detroit’s starting catcher for the time being, reprising his old regular role from the past few years with the Red Sox and Marlins.

The Marlins released him last May in the middle of a three-year, $21 million contract. He finished the season as a backup with the D-backs before jumping back to the American League with Detroit.

Saltalamacchia was 2-for-29 when the Marlins released him last year. He has as many home runs so far this season as he had hits in that stretch with Miami.

“He’s been swinging the bat well,” manager Brad Ausmus said. “Sometimes you just don’t know what time of year you’re going to get hot. Last year he wasn’t hot in terms of power early on. This year he is. I hope he can ride it out. I’d love to see him ride it out for six months.”

The Pirates were holding on to a 2-1 lead in the sixth inning before the middle of the Tigers’ lineup built a two-out rally off reliever Arquimedes Caminero, starting with a Miguel Cabrera double. After J.D. Martinez walked, Nick Castellanos’ single to left continued the rally but wasn’t deep enough to send Cabrera around third.

Thus, the bases were loaded for Saltalamacchia, who flied out to the warning track in right-center field in his previous at-bat against softer-throwing Ryan Vogelsong. Against the harder-throwing reliever, Saltalamacchia jumped the first pitch and sent it midway up the right-field seats for his second home run of the season and the fourth grand slam of his career.

“I’m just trying to be able to get a fastball,” Saltalamacchia said, “and I was really trying to hit it over the shortstop’s head, trying not to get too big. And then he threw a slider that just kind of went right down and into a left-hander’s swing.”

Caminero said it was a cutter.

The approach, Saltalamacchia said, wasn’t to go for a big fly ball, but he’ll take it.

“To be able to accomplish something like that, it’s a great feeling,” he said. “And to be able to obviously help us get the lead and win, it’s an even better feeling.”