Saltalamacchia: Ready to Make an Impact as Coach / 30 Thu 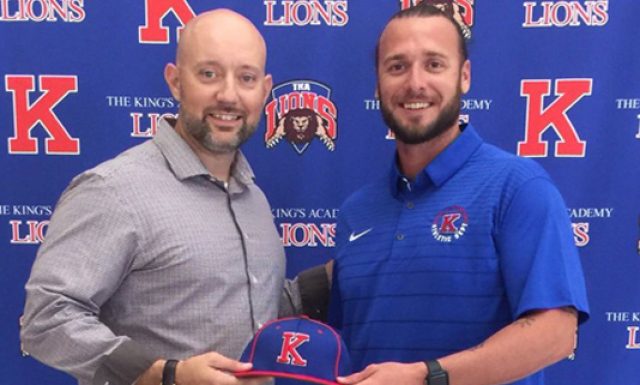 By Gary Curreri for The Sun Sentinel.

Jarrod Saltalamacchia who was a first-round selection of the Atlanta Braves in the 2003 Major League Baseball Draft and retired in 2018, will take over the reins of The King’s Academy baseball team next season.

“I’m so excited to join a program with such a distinct tradition of faith,” said Saltalamacchia, who recently retired from his MLB career and spent the 2019 season on the Lions’ baseball coaching staff assisting another retired Major Leaguer, head coach Brad Wilkerson. Saltalamacchia and Wilkerson first met as members of the Texas Rangers in 2007 after Saltalamacchia was traded from Atlanta as part of a package that sent Mark Teixeira to the Braves.

Wilkerson recently announced that he was stepping down as the Lions’ head coach to pursue other opportunities in the baseball world. In his five seasons at the school, Wilkerson had one winning season when they finished 15-11 in 2016. He was a combined 61-68 for his coaching stint, including 9-16 last season.

“First off,” Saltalamacchia said, “I want to say I think Brad did a phenomenal job at TKA and I enjoyed watching him this past year. It was truly helpful watching how he ran practices and coached these players.

“Leading the baseball program just gives me an opportunity to do the Lord’s work in an area that he blessed me with a unique platform,” he said. “I cannot wait to see all of the great plans unfold that God has for the young men in our program. I’m excited to join a program with such a distinct strength in faith. TKA represents everything I stand for and I’m humbled to be a part of it.”

Saltalamacchia, a 2003 Royal Palm Beach High School graduate, is most noted for his key role as the starting catcher for the 2013 World Series champion Boston Red Sox.

‘We are very blessed to be able to transition smoothly from coach Wilkerson to coach Saltalamacchia,” TKA Director of Athletics Chris Hobbs said. “Jarrod was very impressive in his interview for both the assistant coach role and months later for the head coach role.

“After a long career in the majors, with much of that experience as a catcher, I obviously was not concerned about his baseball knowledge,” he said. “What I value most was how passionate he is about using the platform of baseball to mentor young men for the Lord.”

Saltalamacchia said he looks forward to coaching at The King’s Academy, a private Christian school in West Palm Beach. He plans to be busy this summer.

“First, I want to get out and watch the kids play summer ball and just invest a little time into them from the outside as a fan, so to speak,” Saltalamacchia said. “I want to see what they are working on and see if I can see anything that could help them.”

Saltalamacchia said as a player, the most important factor to be successful is coaching and he has had some great coaches and “some not so great.”

“What separates the great from not was the investment he puts in the player and the culture he creates,” he said. “I want to help build strong young Christian athletes that will strive in life and in their walk with God. My goal for this year and beyond isn’t to win a state championship every year, it’s to put each player in a position to succeed and get them a college scholarship. I have learned this game is short lived and there is a lot of life after it, so that’s why education is so important.”

Saltalamacchia said his philosophy is simple.

“I have told every athlete I have worked with from 7 years old to big league young pups that the difference between each level is consistency,” he said. “Consistent attitude, work ethic and approach. You can’t control what happens after that but if you show up and give 100 percent every day you will get better. Guys that play 10 years in the big leagues all trust the process, trust their ability and trust their approach. My job is to help these players with all of that. I tell them God gave you the ability now it’s up to you what you do with it.”