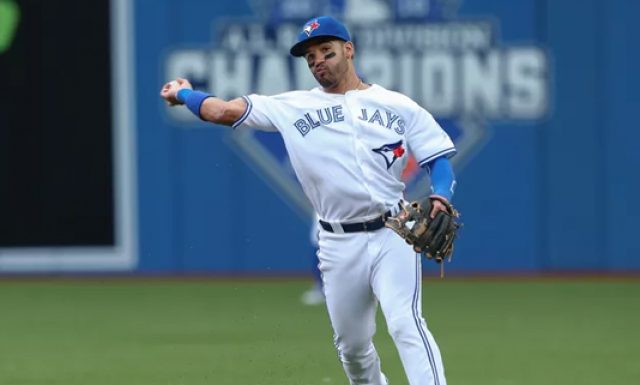 By @eelliott29 for Bluebird Banter

If you asked Devon Travis at the start of last season how he wanted to start his Major League Baseball career, I don’t think his reply would have included getting a glimpse of the big leagues before missing 100 games and undergoing shoulder surgery.

Who in their right mind plans for that possibility, thinks about it even.

Nor would he have guessed that he would make such a triumphant return in 2016 the way he has, becoming one of the game’s top 20 second baseman in WAR despite playing in only 25 games. In June alone, his 0.9 WAR ranks seventh in the entire major leagues at the position.

Speaking to Bill Lankoff of the Toronto Sun, Travis admitted that he wondered if he could ever reclaim that glory from his rookie season. He even had Dr. James Andrews, the surgeon who scrubs in on some of the world’s most famous athletes, tell him that he wouldn’t do the surgery.

“Here I am looking at the best doctor in the world and for him - a guy who’s seen everything - to tell me that. Well, that stuck in my brain, big time.”

How couldn’t that be true? That sense of doubt is one many writers and fans will never be able to understand. It’s what makes stretches like the one he’s currently on as memorable as they are.

This year, Mr. Travis is sitting on the winning lottery ticket, batting .264/.304/.439 with an impressive six home runs. The interesting point is that his BABIP, the sabremetric highlight of an over-performer, sits at a mere .292. At that rate, you wouldn’t suggest he’s doing something that he shouldn’t.

It wouldn’t be ludicrous to suggest he’s exactly where he’s going to be throughout the rest of the season. He doesn’t scald the ball at the plate, but he doesn’t thrive off of a ton soft hit balls either. Just 18.5 per cent of his balls in play this season have been hit “soft” according to Fangraphs’ measures.

While these numbers may seem like league average offensively, that’s because, largely, they are. For many years the Blue Jays have stumbled and faltered on their quest to find a decent, respectable or even playable second baseman. Look up the player history at the position and it’s not exactly the friendliest sight. Names like John MacDonald and Emilio Bonafacio headline the list with the next best second baseman likely being Aaron Hill.

For those of you who don’t know, Aaron Hill left the Jays in 2011 after he was unable to rediscover his career season that he had in 2009 where he was worth 4.1 WAR. That said, if you look at the WAR leaderboard for individual seasons by Jays’ second baseman since Hill’s 2009 season—the best season by a Jays second baseman in the 21st century—the next best season is none other than that of Travis’s 2015 rookie campaign. If that sample size is too small for you, look back to 2000 and Travis’s part season ranks 7th among Jays’ two-baggers like Orlando Hudson and Marco Scutaro who were playing in the prime of their careers when they put up those numbers.

Currently Travis sits at 0.8 WAR for the 2016 season with just 38 games played. With 71 games left in this season, which you could assume he will play at least 60 of barring injury, Travis should be able to play himself into the territory of a two-win player.

What this tells you as a Jays fan, and fan of Devon Travis, is as much comforting as it is inspiring to future Blue Jays teams. In just two seasons, he’s become one of the best second baseman the Jays have seen in recent history and he’s here to stay. The moral of the story is that Devon Travis likely isn’t going to be Josh Donaldson any time soon, and that’s okay.

If he has to settle for being a 2-3 win player and the next best thing since 2010, I’ll be able to turn on the TV every night and live with that. You should too.