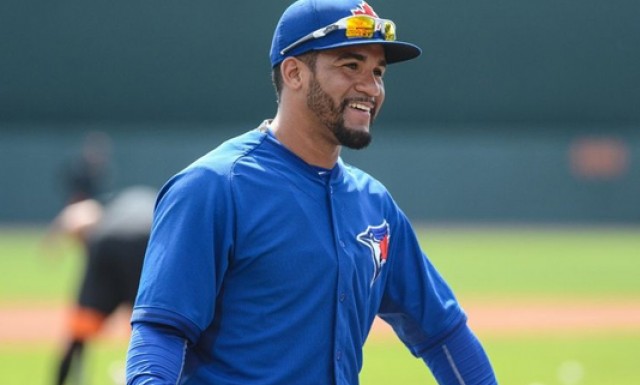 By Ben Cosman for MLB.com

TORONTO — When Blue Jays second baseman Devon Travis hit his first career grand slam during Toronto’s game against the Indians on Sunday, it emphasized the kind of debut campaign he’s putting together in 2015. Because really, it’s as if the rookie can’t help but mash baseballs to smithereens.

Sunday’s slam came 23 games after Travis’ first homer in the Jays’ opener, which, not so coincidentally, was also his first MLB hit.

…And there were five additional round-trippers in between, including one into the seats on the Green Monster.

All told, Travis is batting .318/.394/.625 with seven home runs and six doubles in 99 plate appearances. They’re different styles of players, but for comparison’s sake, last year’s AL ROY Jose Abreu batted .259/.340/.600 with seven homers and six doubles through his first 97 plate appearances. Travis likely won’t turn into the next Jose Abreu, but he’s off to a similarly hot start.

Here, watch another of Travis’ homers, from April 24:

But Travis isn’t just impressive for a rookie. Sure, he leads MLB rookies in average, hits, doubles, homers, runs, RBIs and slugging percentage, but his 23 RBIs are also third in the Majors, his seven homers are tied for sixth and his offensive WAR is best among AL second basemen. It’s no wonder that after starting the season batting ninth in the lineup, Travis has been leading off of late.

And to make things even more satisfying, a breakout like this wasn’t exactly expected. Travis was just the Blue Jays’ eighth ranked prospect heading into 2015; he’d only played in 100 games above Class A in the Minors. But Travis won the Opening Day job in Spring Training and he hasn’t looked back since.

In short, Travis might be enjoying the best start to the season of any rookie, and that’s saying something. In a single month, Mookie Betts broke physics with his catches, the Cubs’ lineup came to feature Kris Bryant and Addison Russell, Archie Bradley bested Clayton Kershaw in his very first MLB start and Joc Pederson morphed into the human embodiment of “didyaseethat?” But Travis — well, you know.

This story was not subject to the approval of Major League Baseball or its clubs.