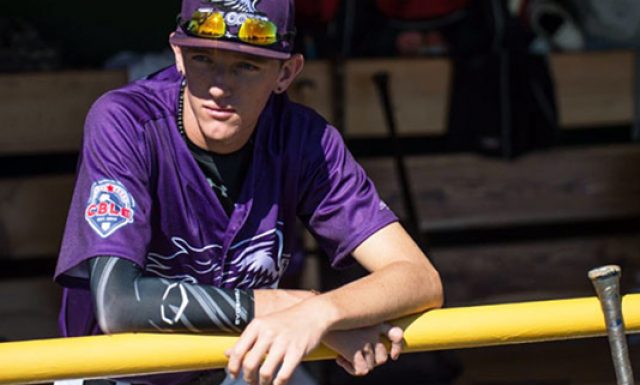 Written by Jack Lowenstein for The Town Crier.

Heading into his senior year at Wellington High School, Daniel Keating is committed to being a baseball player and a member of the school’s Fire Science Academy.

Keating had the experience of a lifetime this summer when he played for the Sant Boi Falcons of the Collegiate Baseball League of Europe.

Keating said the Falcons were made up of mainly American ballplayers, with him being the youngest at 17 on a mainly college-level roster.

“We started off flying from New York to Barcelona, Spain,” Keating said. “From Barcelona, we played three or four games there. Then, we took a 12-hour bus ride over to France. Then from France, we played a few games there.”

Keating pitched and played first base for the Falcons. The team ended the season with an overall record of 10-4-1.

“We lost in the semifinals. But we were the number one seed the entire season,” Keating said.

Keating has proven himself to be an all-around ballplayer, able to fit into most positions on the field — as evidenced by his summer experience in Europe.

Before Keating started the summer season, he was focused on his experience and his performance.

“Going into the summer, I was looking forward to playing baseball at an international level,” Keating said. “Before I left, I was doing a lot of training at Athletes Advantage with a trainer, making me stronger.”

A majority of the players were already competing in college for Division II teams, Keating said.

His mother, Jackie Keating, said that family friend Larry Cummings saw him pitch at a WHS game against Jupiter High School this past season.

“One of the coaches, a relative [of Cummings], said he was looking for pitchers for this team, and my son was recommended,” she said.

Ultimately, Keating and the Falcons lost to the eventual league champions, the La Rochelle Admirals. Still, he got to play at the international level, and it helped solidify his decision to focus on being a baseball player over other team sports. Well, that is, if he doesn’t become a professional firefighter first.

Keating is heading into his fourth year at the WHS Fire Science Academy and is a Palm Beach County Fire-Rescue cadet. He continues to balance the effort he puts into both his aspirations, to compete as an athlete and working toward his dream of becoming a firefighter.

“With the upcoming season, I don’t know how well it’s going to work,” he said, noting that he will be taking his state certification class every Wednesday night from 6 to 10 p.m. “So, that’s going to be difficult, and then on the weekends, if I have practice, those are the times I usually do the 24-hour shift, so it’s going to be hard to balance that, too.”

Keating has been able to get experience ahead of his years through the Palm Beach State College program offered at the high school.

Keating has been getting his certifications, taking tests in the classroom and getting experience in the field. “I go through the same classes that every firefighter hired right now went through. I’m taking the same classes as grown men who are trying to become firefighters,” Keating said. “And then, when I’m out in the field riding, it’s mostly hands-on stuff.”

Weighing in at 187 pounds and standing at 6 feet, 5 inches tall, Keating still sees room for growth in both areas of interest and passion for him.

“I feel I’m a good all-around athlete because of my ability to play different positions. If I had to improve one thing, it would be getting bigger and stronger to hit further and throw harder,” Keating said. “When you become a firefighter, you’re never done learning. You’re always going to classes, always trying to get more knowledge, because no one ever knows everything that they need to know.”

Born in New York, Keating moved to Wellington with his mother, Jackie, and father, Bob. Most students who attended Wellington Landings Middle School after 2007 know his father as its friendly neighborhood school police officer.

“In my eyes, he’s always going to be a kid. But he surprises me every day with his helpfulness, generosity and maturity,” Bob Keating said. “For a high school kid, he’s got his head on his shoulders. And, I attribute that to his mom and I at times being strict, and at times letting him find his path.”

Since the time that Keating walked across the clay field at 5 years old, his mother, Jackie, has never wavered on their decision to move to Florida.

“I’m so glad that we moved here,” she said. “So many people make decisions when they retire… I just feel like moving to Florida was a perfect decision because he has been able to play sports here year-round.”

Jackie said in the 22 days he was away this summer, he evolved as a person.

“I think this whole trip to Europe has matured him so greatly,” she said. “He left as a kid and came back as a man.”

Keating has not made any decisions yet as to whether he will choose to pursue one career path or the other. He enters his senior year ready to play for the Wolverines on the field and dedicate himself to the fire academy and his responsibilities as a cadet.

“As of right now, I’m trying to balance the two as best as I can,” Keating said.