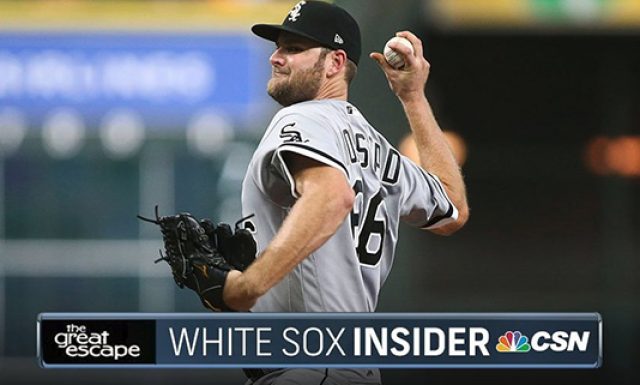 HOUSTON — Two weeks ago Chris Volstad was focused on Hurricane Irma prep when the White Sox called to invite him to the majors. On Thursday night, he earned his first major league victory in more than five years as the White Sox defeated the Houston Astros 3-1 at Minute Maid Park.

Volstad, who had only made 10 big league appearances the previous four-plus seasons and spent all of 2017 at Triple-A Charlotte, allowed a run in 4 1/3 innings to pick up his first win since Sept. 10, 2012.

He hadn’t just shut it down after the Triple-A season ended, Volstad was actually shuttering his Jupiter, Fla. home and business the day the short-handed White Sox called.

“I was probably a little mentally shut down,” Volstad said. “But yeah, it’s kind of crazy how things can change. I guess it’s been about two weeks now. At home getting ready for a hurricane and then getting called back up to the big leagues.”

Volstad received word he might pitch early in Thursday’s game when a blister on Carson Fulmer’s right index finger worsened. Fulmer felt some discomfort after his Friday start at Detroit.

The White Sox let Fulmer try to go but yanked him after 20 pitches, including two walks. That brought out Volstad, who along with Al Alburquerque was promoted Sept. 10 after the White Sox lost several pitchers to injury.

The White Sox actually had to track Volstad down two weeks ago as he’d already been home for a week. He spent part of the time prepping for Irma, including boarding up his brewery.

He escaped a first-inning jam with a double play ball of the bat of Carlos Correa and ended a threat in the second with a pickoff at second base of Alex Bregman. After he surrendered a solo homer to Brian McCann in the third, Volstad retired the final eight men he faced.

He was awarded his first victory since he defeated Thursday’s Astros starter Dallas Keuchel 1,836 days ago here. Volstad remembered the win because Houston was still in the National League and he had a base hit in the five-inning start for the Cubs. He went 3-12 for the Cubs that season.

“You’re able to lock it in pretty quickly and get focused at the big-league level, you have to,” Volstad said. “But being home in Triple-A for the last few years, just getting called up about 10 days ago, I’ve got people following it, but it’s kind of unknown I guess. It’s a little surprising, but I’m glad to be a part of a team for sure.”