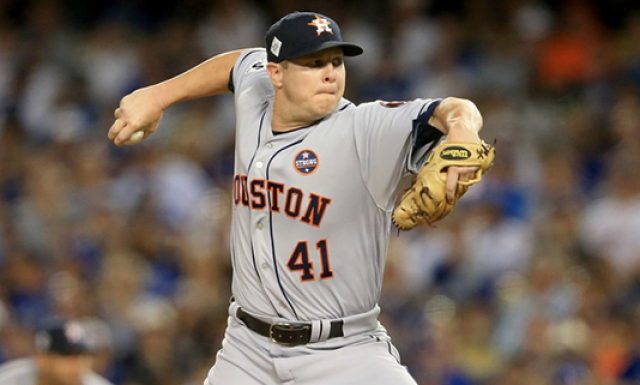 As a Palm Beach Central third baseman more than a decade ago, Brad Peacock never thought about playing in the World Series.

He was more concerned about winning a district championship with the Broncos.

“I didn’t think about anything else other than helping the team win,” said Peacock, now a right-handed pitcher with the Houston Astros, who are tied 1-1 with the Los Angeles Dodgers as the Fall Classic heads back to Houston for Games 3-5 this weekend. “I didn’t think about the next level or anything. I was just worried about the team.”

But there Peacock was Tuesday night, taking the mound in the seventh inning of Game 1 on a 100-degree night in a packed Dodger Stadium.

Peacock, 29, came on in relief of Astros starter Dallas Keuchel, who left the game with a runner on first and two outs, and the Dodgers holding a 3-1 lead.

Peacock walked the first batter he faced, but got the second batter to fly out to center to end the inning. His night ended there, and Los Angeles held on for the win .

“It was crazy,” Peacock said of his first-ever World Series appearance. “It was a dream come true. It was a lot of fun.”

There were no nerves when he got to the mound, but Peacock said he was experiencing them while warming up earlier.

“In the bullpen, I started to feel it,” he said. “But on the mound, I felt great. There were no nerves at all. I felt confident.”

Peacock’s relief appearance Tuesday — he didn’t pitch in the Astros’ 7-6 win in Game 2 Wednesday night — was his third of the postseason following a Game 3 start against the Red Sox in the American League Division Series.

Peacock gave up three runs in 2 2/3 innings in that start, and Boston went on to win 10-3. But the Astros came back in Game 4 to clinch the series.

Before his start against the Red Sox, Peacock was able to share a moment with his parents, Jerry and Jacyne Peacock, that was reported by MLB.com. He tossed a ball to his parents from the Fenway Park bullpen and his mother caught it. Peacock’s parents said they have “over 1,000 balls” that he has tossed to his dad during his career.

Jerry Peacock, a retired police officer, traveled across the country watching his son progress through the minors, with stops in towns like Hagerstown, Md.; Burlington, Vt.; Scottsdale, Ariz.; Sacramento, Calif.; Oklahoma City; and Syracuse, N.Y. just to name a few. He told the Houston Chronicle about the family tradition of the pre-game ball toss: “Any of his starts, I try to catch the ball. I go home and mark it. I’ll put the stats on it … Hopefully good stats. But the stats are on all of them, whether good or bad.”

Peacock pitched in relief twice against the New York Yankees in the American League Championship Series, allowing a total of two runs and striking out four in 2 1/3 innings. Houston won that series in seven games to reach the World Series for just the second time in franchise history.

“I could have been a little better,” Peacock said of his earlier postseason appearances. “But it happens. These teams are the best of the best, and you’ve got to be perfect. I had a couple of pitches that got away from me. Hopefully I can have a good World Series.”

Peacock’s former pitching coach at Palm Beach Community College, where he enrolled after graduating from Palm Beach Central, is looking forward to that.

Kyle Forbes, who helped convert Peacock from an infielder to a pitcher, has been following his career since he signed with the Washington Nationals in 2007.

Peacock was a 41st-round draft pick of Washington in 2006, but elected to play at Palm Beach Community College — now Palm Beach State College — and helped lead the Panthers to the state tournament berth in 2007. He finished 8-2 with 82 strikeouts in 75 innings pitched that season.

He made his Major League debut in 2011 with the Nationals, and joined the Astros two years later. This season, Peacock went 13-2 with a 3.00 ERA and 161 strikeouts.

“Everyone at Palm Beach State is so proud of Brad,” Forbes said. “He is both a great pitcher and a great human being. We are so happy for him.”

Peacock credits Forbes for molding him into the pitcher he is today.

“I didn’t know anything about pitching,” said Peacock, who lives in Wellington in the offseason. “I came to him, and he showed me the way. I thank him a lot for everything he did. He definitely taught me a lot.”

Brad Peacock of Wellington, who played at Palm Beach Central and Palm Beach Community College (now Palm Beach State College) before beginning his professional career, pitches in relief for the Houston Astros during the seventh inning against the Los Angeles Dodgers in Game 1 of the 2017 World Series at Dodger Stadium on October 24, 2017 in Los Angeles, California. (Photo by Sean M. Haffey/Getty Images)