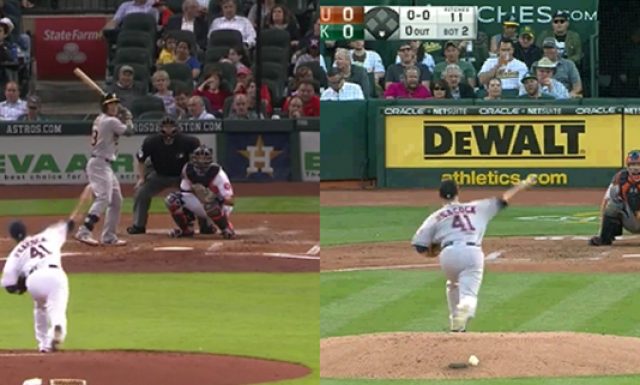 Written by Jeff Sullivan for FanGraphs.com

But Brad Peacock is leading all starting pitchers in strikeout rate. Not Chris Sale. Not Max Scherzer or Clayton Kershaw or Corey Kluber. Brad Peacock. Yeah, I had to lower the innings minimum, because Peacock hasn’t been starting the whole time, but when he was a reliever earlier on, he got a whole bunch of strikeouts, too. Let me show you a table, including 2016 and 2017 contact rates allowed: (See Table in Original Article)

Peacock has a long history of pretty average contact rates. Relatedly, he was essentially a replacement-level pitcher. Now a third of all swing attempts are missing. This can’t not be discussed. Strikeouts might be everywhere, sure, but this is the first time Peacock has managed to find them.

At 29, Peacock might seem a little old for a breakout. And, to be fair, we’ll have to see exactly what he can do throughout the second half. But we’ve read enough anecdotes to know that sometimes, for some players, it just suddenly clicks. This can be especially true for pitchers, who can change their whole profiles with one mechanical tweak, or with one new pitch. For Peacock, so much of the story comes down to an adjusted arm slot. Injuries cost him just about all of 2015. Before that, Peacock threw mostly over the top. Now Peacock has lowered his angle. On the left, here, Peacock from 2014. On the right, Peacock from the other day.

That’s a pretty substantial shift, and if the results are to be trusted, it’s paid considerable dividends. James Paxton is one recent pitcher who’s found plenty more success after dropping down. Peacock looks to be the same, saying that he just feels more comfortable around three-quarters. The new delivery had an effect on Peacock’s entire repertoire.

Something that happens when you start pitching from a lower slot: your pitches move more left and right, and less up and down. Peacock wound up with a fastball with additional tail. And his breaking balls moved more laterally in the other direction. To put it another way, Peacock’s fastball started to bore in on righties, while his breaking pitches broke more toward lefties. This is by no means an unusual profile, but it was all new to Peacock. Suffice to say it took some getting used to.

Enter 2017. Peacock has lowered his arm a little bit more. And he’s now just more comfortable with the way that he throws. The lowered arm slot is now familiar, and Peacock has unlocked a dynamite slider. It’s a slider he threw in 2016, but now he’s commanding it better. Some heat maps, from Baseball Savant: You see the shift you want to see: down, and more glove-side. That’s where righty sliders are supposed to go. Peacock’s average slider has dropped an additional 2.9 inches, compared to last season. It’s also moved over an extra inch. The result is that Peacock’s slider has become something nearly unhittable. I looked at the Baseball Prospectus PITCHf/x leaderboards, and I isolated all pitches of all types that have generated at least 100 swings so far this year. Here are the pitches with the lowest contact rates: (See Table in Original Article)

Peacock’s slider ranks second-best. The pitch has missed the bat more often than it’s hit it. Of note is that that table includes five different Astros, out of 10 individual pitches. I don’t know what that means; the Astros are good. This is about Peacock, and this is his slider in action:

Not bad. Well-placed, for a strike. Moments later, the putaway:

It’s a slider that just takes off. It keeps on going, more than hitters expect it to. Sliders are swing-and-miss pitches, two-strike pitches, and it’s not uncommon for sliders to generate very low rates of contact, but Peacock never before flirted with this kind of level. Even last year, the slider allowed 74% contact. The swing-and-miss rate has doubled. A pitcher would be hard-pressed to not be really good, given that kind of improvement.

There are other little quirks, factors that probably also help to explain what’s been happening. Peacock’s four-seam fastball has generated an extremely low swing rate. For whatever reason, it just seems to catch hitters off guard. Against righties, Peacock has started to mix in a two-seamer, giving him a fastball to the other side of the plate. And lefties have to deal with Peacock’s curveball, in addition to the slider. Here’s one curve:

That’s not the greatest curve ever thrown; in that clip, an over-aggressive hitter takes it for a ball despite having been behind in the count. I could’ve, if I wanted to, pulled a clip of a curve getting a swing and miss. But I really just wanted you to see the shape of it. Peacock’s curve is very similar to his slider, in terms of the horizontal break. But the curve is slower by four ticks, and it drops nearly an extra 11 inches. The curveball basically plays the role of changeup to the slider. That’s an uncommon blend, but Peacock has it. Lefties have managed a .292 wOBA.

Finally, there’s one more thing. It’s something Peacock messed around with last September. Here are two screenshots from a recent outing: Do you see it? Peacock now changes his position on the rubber, depending on the handedness of the hitter. When a righty is up, Peacock works from the extreme first-base side. When a lefty is up, he moves to the third-base side. Presumably, against righties, this helps Peacock stay away, whereas against lefties, it makes it easier for him to try to throw back-foot breaking balls without hitting a bunch of batters. Horizontally, there’s more than a foot of difference between Peacock’s release points, based on handedness. There are only four other pitchers who could say the same. Francisco Liriano has pretty much always done this, but it’s rare, and new to Peacock himself. Just another part of the delivery to get used to.

The point isn’t that Brad Peacock’s becoming an ace. He’s barely even taken a turn a third time through an order. Peacock doesn’t have ace-level stamina, nor does he have ace-level command. But he is getting ace-level swings and misses, shutdown-reliever-level swings and misses. He’s doing this for innings at a time, and it’s not hard to see him at least becoming another Chris Devenski type, on a roster that already has the original. Brad Peacock lowered his arm slot, and tremendous success has followed. It’s just what the Astros didn’t need– another good arm that hitters can’t hit.