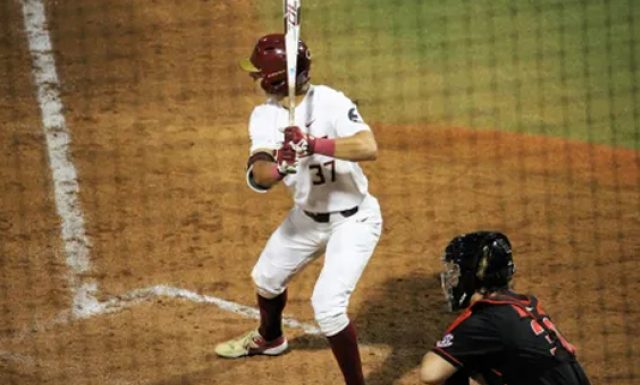 Athens, Ga: Facing a true ace on the mound and a heavy favorite in the opposing dugout, Florida State didn’t flinch.

And it has, of all people, a walk-on outfielder to thank for it.

Tim Becker continued his miraculous run Saturday against the Georgia Bulldogs in the winner’s bracket game of the Athens Regional.

The walk-on senior outfielder homered off UGA pitcher Emerson Hancock — widely regarded as a potential No. 1 pick in the 2020 MLB Draft — to spark an FSU rally that turned an early 2-0 deficit into a 10-2 lead a mere two innings later.

From there, the Seminoles (38-21) rolled to a dominant 12-3 victory over the No. 4 overall seed Bulldogs (45-16). The win moved the Seminoles into Sunday’s Athens Regional Final, one win away from clinching a spot in the super regional round.

“It was definitely a spark. Just got to be there when the team needs you most,” Becker said.

“Saw a fastball to hit early in the count, just went after it and good things happened.”

With two hits and three runs batted in Saturday, Becker now has three home runs, four hits and seven RBI in two games of the Athens Regional. He had eight hits, four RBI and no home runs in 38 games entering this weekend.

“We kind of anticipated him getting a hit, but that ball leaving the yard definitely sparked us up.”

It was just the fourth time this season UGA had lost at home at Foley Field, which had a contentious crowd of 3,046 fans for Saturday’s highly-contested matchup.

The larger UGA segment was quite boisterous in the early innings, but was silenced by a sizable traveling section of FSU fans as the game progressed.

True to form, FSU head coach Mike Martin was quick to not look too far into the future.

“This (regional) is a long way from being over. We know that. We know that the host school will be playing tomorrow and we know we’re going to have to have the same effort to accomplish what we want to do,” Martin said.

“You just have to look at tomorrow as if this day did not occur. Tomorrow, these young men know what they have to do to be successful.”

Getting to the Bulldogs

The Seminoles found success better than any other team had this season against Hancock.

He hadn’t allowed more than three runs or six hits this season. Becker’s homer was just the fifth he had allowed this season.

FSU tagged him for five runs, all earned, on nine hits and chased him after four innings of work.

“From the get-go, we knew he’s a dog on the mound. He’s a great pitcher,” Becker said.

“We were just trying to attack him early, not let him get ahead on the mound. I think we did that well in the first inning and just kept it rolling from there.”

After getting to the UGA bullpen, the Seminoles still didn’t relent, plating five runs in the fifth off UGA reliever Ryan Webb and two more in the seventh.

The Seminoles finished with 12 runs on 15 hits against a UGA pitching staff that entered the NCAA Tournament with a 3.10 ERA, fifth-best in the country.

“They got the best of us tonight.”

Through two NCAA Tournament games, the Seminoles have plated 25 runs on 35 hits and hit nine homers.

Battle of the Aces

While he’s not as highly considered as Hancock, FSU starter C.J. Van Eyk is a first-round 2020 prospect in his own right.

It’s definitely some more motivation going up against a top guy like that.”

The sophomore made his NCAA Tournament debut opposite Hancock Saturday and got off to an inauspicious start.

He surrendered a leadoff homer to UGA center fielder Tucker Maxwell on the second pitch of the game. Two more UGA batters singled before he escaped the first frame.

From there, Van Eyk settled in nicely, handling the moment far better than his UGA counterpart.

He matched his career high with eight innings and allowed two runs on six hits over his final eight innings. He issued no walks or hit-by-pitches and struck out nine Georgia batters.

“It was definitely a huge game for us tonight. I just try to keep that same energy every time I pitch,” Van Eyk said.

“No team is going to faze us, faze me so I’m just keeping the same energy, keeping my head down and getting the win for our team.”

Van Eyk held UGA to a .267 batting average with runners on base and one hit in seven at-bats (.143) with runners in scoring position.

“C.J. pitched a whale of a game,” Martin added.

With the win, the Seminoles are through to Sunday’s Athens Regional Final.

They’ll take on the winner of the UGA-Florida Atlantic game at 6 p.m. The winner of that game will need to beat the Seminoles twice while FSU needs just one win to advance to the super regional round.

Martin didn’t know which pitcher FSU will start Sunday — the likely candidates are Shane Drohan and Conor Grady — and said the coaches will make a decision when they get back to the hotel Sunday.